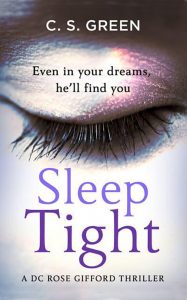 A truly haunting thriller to keep you up all night!

A story that takes us into the dark realms of the world of sleep paralysis was always going to intrigue me – it’s something I have occasionally suffered with, waking to feel a heavy weight pressed upon my chest, the bedclothes flapping against my neck and once, worst of all, a disembodied arm pulling my own arm out of bed!

Fortunately, the nightmares are rare and last only a second or two – but for the victims of the bogeyman who haunts the pages of this fabulous thriller, they recur night after night, becoming more and more threatening and, for poor unfortunate Hannah Scott, ending in tragedy.

She’s discovered in her locked bedroom, hair neatly brushed, arms gently folded, a veritable Sleeping Beauty in death. The police might have put it down to natural causes, were it not for the tell-tale signs of suffocation.

As part of the investigation team, young detective constable Rose Gifford is determined to bring her killer to justice.

At first Hannah’s ex-boyfriend is arrested for the crime – but when it becomes clear it couldn’t have been him, Rose is forced to delve deeper, not only into the mystery of Hannah’s death, but into her own haunted childhood growing up in a household infested by ghosts.

Rose’s mother Adele was a charlatan medium, deceiving and fleecing the grieving. Perhaps that is why Rose herself is in a constant state of denial of her own psychic powers. Surely the ghost of her mother that haunts her house is a trick of the light, like the shadows she sees in the night?

Rose just won’t let herself believe that a young woman could be killed by her nightmares, not even when a second young woman, Kirsty, approaches her with the same story that Hannah shared with her friends, of a presence in the night, a man in a balaclava, who’d disappear as soon as she opened her eyes. But then Kirsty, too, falls victim to her nightime visitor …

Is the perpetrator of this heinous crime truly a bogeyman, a being with supernatural powers to travel through his victims’ subconscious and realise their deepest fears? Or is he something more prosaic? A mortal man who gets his thrills from his victims’ terror at his invasion of their most private sanctums.

To solve this case, Rose will have to keep an open mind – and co-operate not only with her colleagues at the station but the enigmatic Uncharted Crimes Investigation Team whose leader, DS Sheila Moony creeps Rose out almost as much as the ghost of her dead mother!

This was a truly gripping read. Terror, tension and traumatic nightmares stalk its every page, keeping the reader on constant high alert for what might happen next. The plot is skilfully and tightly woven, allowing us to keep an open mind but never distracting from the haunting, supernatural atmosphere surrounding Rose’s investigations.

Rose is a super character. Young, idealistic and keen, her eagerness leads to her making many mistakes, but her dogged determination to get to the truth keeps her going through the adversity of a fall-out with her best friend and the dislike of her superior DCI Rowland, who has her own reasons for wanting Rose off the case, and out of her police station.

Rose’s vulnerability mirrors that of the victims she is seeking justice for, and her own story as she journeys towards acceptance of the fact that there may be paranormal worlds out there is every bit as fascinating as the murder mystery she has set out to solve.

My enjoyment of this story was also down to the writing itself. C.S. Green’s precise prose engages all the senses, whether we’re sharing Kirsty’s dreams from her lavender-scented pillow, shivering in the cold and gloom of Rose’s shabby London home or peering through her rain-lashed car windows as she travels along the Yorkshire moors in search of witnesses who will give her a clue to just what is going on.

It looks like this might be first in a DC Rose Gifford series of crimes that seem impossible to explain or solve. I can’t wait for the next one!

Meanwhile, read this book and before you go to bed tonight you’ll be locking all your doors and windows and checking under the mattress to make sure that you’re alone.

Sleep Tight by C.S. Green is published by HarperFiction in hardback, RRP £12.99

Thanks to HarperFiction for inviting me on to this #blogtour and to NetGalley for the advance copy of the book in exchange for an honest review. 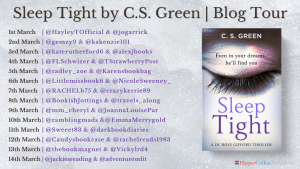 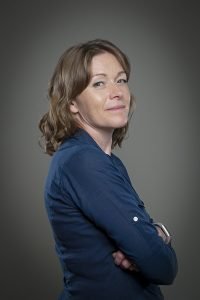 C.S. Green is the pseudonym for Sunday Times and ebook bestseller Cass Green. Her debut adult novel The Woman Next Door was a No.1 e-book bestseller and her second, In A Cottage, In A Wood was a Sunday Times top ten and USA Today bestseller. Don’t You Cry was her third standalone thriller. She is the Writer in Residence at East Barnet School and teaches crime fiction at City University and children’s fiction for Writers and Artist’s Yearbook.