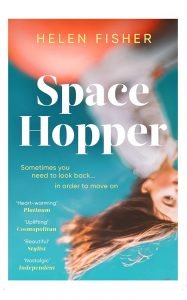 One woman’s poignant search for her late mother

Do you believe time travel is a possibility? I didn’t until I was offered the chance to be part of the blogtour for the paperback issue of this story, which I’d missed out on when it was published in hardback!

Well maybe not time travel, but definitely second chances – and that’s just what the heroine of Space Hopper, Faye, is looking for when she discovers a way to travel back in time to get to know her long-dead mother, Jeanie.

Jeanie died when Faye was just eight, leaving the little girl to be brought up by kindly older couple, Em and Henry.

In an effort to protect her, they were always reticent about the circumstances of her mother’s death, and Faye has grown up with very few memories of her mother.

Now happily married with two little girls of her own, the older one approaching her age when she lost her mother, Faye can’t help dwelling on the mother and daughter relationship that she and Jeanie both missed out.

Then she finds a photograph of herself in one of her mother’s old cookbooks. Taken at Christmas, little Faye is sitting in a Space Hopper box, laughing happily, unaware of the tragedy soon to come.

By serendipity, that same day her husband Ed brings down the very same box from the loft. Faye saves it from the skip, but in taking it back to the loft, she accidentally trips into it, and is transported through time and space to her childhood home, when her mother was still alive.

It’s the first of several trips, in which Faye does get to know her mother, and her own younger self.

But will her journeys back in time alter the course of her future? Can she save her mother, without losing everything she herself has gained in life in the intervening thirty years? What other lives will her presence in the past affect?

These are huge metaphysical questions, and the author does address them in a light and accessible way, but time travel is not the main theme of the book, of course, but rather a plot device to explore the importance of the mother-daughter relationship; to consider the recognition and impact of unresolved grief; and to debate the question of faith.

This faith issue is explored in different ways. While Faye is a non-believer, her husband Ed is training to be a vicar, and so questions of God’s existence sneak into the narrative. Faye’s blind gay friend, Louis, also gives us an insight into faith – he can know something exists without seeing it, and he’s the only person Faye feels she can confide in about her time travel.

For Ed might believe her, but he’d also try to stop her. Here, time travel is not a smooth ride, and Faye gets a physical as well as an emotional battering every time she steps into the box.

Such deep issues may make the book sound heavy, but it really isn’t.

It’s an intriguing and heartfelt story with wonderful warm characters. An air of wistful nostalgia permeates the narrative, but hope is never far away. Not just for Faye, but for Jeanie, who may not recognise Faye as her grown-up daughter but still feels an instant connection with her.

I particularly liked the way the author kept this real – just as in any mother/daughter relationship, Jeanie and Faye never share a fully equal relationship but are in turn dependent on each other. It’s just as the dynamics of their real-time relationship would have been.

I can’t finish this review without mentioning the beautiful prose Helen Fisher employs. She has a lovely turn of phrase, and her use of original, often humorous similes complement the overall metaphor of the time-travel plot device.

Helen Fisher also engages the reader directly – Faye is writing for you! Accept her invitation, suspend your disbelief and travel with her through time.

It’ll be a bumpy ride emotionally at times, but full of surprises right to the end. I hope you enjoy it as much as I did.

Space Hopper by Helen Fisher is published by Simon & Schuster in paperback and ebook. 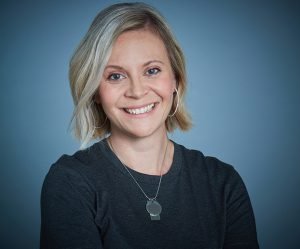 Helen Fisher spent her early life in America, but grew up mainly in Suffilk where she now lives with her two children. Space Hopper is her debut novel.

Thanks to Anne Cater of Random Things Tours for inviting me on this blogtour and to publisher Simon & Schuster for a copy of the book in exchange for an honest review. 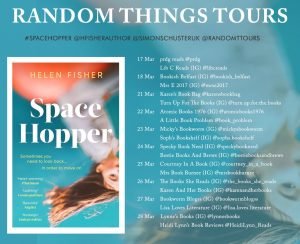