Posted at 12:32 in Crime, Domestic Noir by Karen Byrom 0 Comments 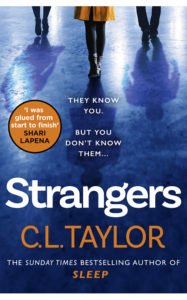 As Ursula, Gareth and Alice gaze down on the body of a murdered man, we’re introduced to the first mystery of this enthralling story of three strangers whose lives are somehow interconnected.

The big question is which of them murdered him? And why?

The narrative then takes us back in time to a few weeks earlier, to pick up their individual stories – and don’t they each have issues!

Courier Ursula’s ex best friend has thrown her out for stealing. Her new landlord Edward is a weirdo – and what is he hiding in his basement? She’s also worried about a customer who may be a victim of domestic violence. And all the time she’s regretting the loss of her old life as a schoolteacher when she was so happy with Nathan, the love of her life.

Divorced Alice is dipping her toes back in the dating water, and is rescued from a creepy date by Simon, who soon sets her heart racing. But when Alice begins receiving Facebook messages warning her off Simon, she starts to wonder if he is all that he seems.

Security guard Gareth wishes he could ask out his kind neighbour. But he has to look after his old mother, a dementia sufferer. His task isn’t made any easier by the fact she has been receiving strange postcards, signed by his father, a man who has been missing presumed dead for over 20 years. Could Gareth’s father be alive? He needs to find out, but how can he risk upsetting his already hard-to-manage mother.

These are three engrossing stories, though the interconnection between Alice, Gareth and Ursula remains so loose that you wonder just where the overall story is going. But don’t let that put you off! C.L. Taylor’s clever plotting interweaves them just enough to keep you guessing and keep you reading.

And then there are the characters. Ursula and Gareth are particularly endearing people, misfits in an unforgiving world, and you long for their happy endings. Along with Alice’s, their individual stories are enthralling enough, but put them together and you really do have a tense, suspenseful drama that will keep you turning the pages to the final, thrilling denouement.