29 Apr Summer on a Sunny Island by Sue Moorcroft

Posted at 08:32 in Popular Fiction, Romance by Karen Byrom 2 Comments 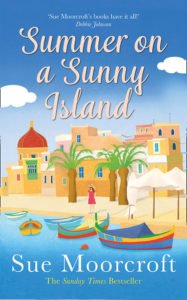 Sun, sea, scenery – and a hint of smouldering sex!

A summer romance is the last thing Rosa is looking for when she flies out to Malta to act as PA to her mother, a celebrity chef researching and compiling her next book based on recipes from the island where she spent her childhood.

No, Rosa has suffered enough heartache in the shape of two-timing Marcus, who also trashed her reputation before dumping her for her best friend.

So when Rosa meets fellow Brit Zach, who is also spending summer on the island, it’s on a strictly “no-date” basis.

That suits Zach – he, too, is escaping his past as a troublesome youth – and atoning for it by volunteering with a local youth group on the island. Soon Rosa gets involved and the two gradually bond in their efforts to keep teenager Luccio out of trouble.

As their friendship deepens, so does their growing attraction – how long can they resist each other?

Ooh! Sun, sea, sand, stunning scenery – and a hint of smouldering sex – makes this the perfect summer read. Zach’s an attractive character – handsome, sensitive, “woke” in his dealings with the vulnerable women around him (who include his sister and his mum) but with just enough hint of a bad boy to save him from plaster sainthood!

Rosa’s the girl we want to be – hurt, homeless and between proper jobs she may be, but though she is down, she is never out, and she is fierce and feisty in her dealings with her ex, Marcus – and any other man who dares cross her path.

Add in cute Paige, Zach’s four-year-old niece and the assorted members of Rosa and Zach’s family, and you’ve got a great cast of characters sparking off each other as they come together to resolve the challenges in their lives.

The subplot involving Luccio and the gang he hangs outs keeps the action going, adding a spice of intrigue and danger, but romance is never far away in this sizzling summer read.