Posted at 15:38 in Crime, Domestic Noir by Karen Byrom 2 Comments 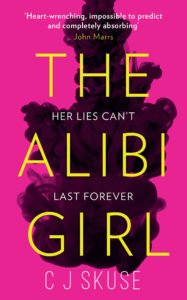 Joanne Haynes has a secret – that is not her real name.

Nor is it Mary, nor Ruth, nor Genevieve – though that’s how she introduces herself to different people. Sometimes she’s a doctor with five children, at other times a cancer sufferer in remission, a best-selling author, a pregnant bride, or a girl who went to school with Meghan Markle.

So lost is she between fact and fiction that it’s hard to trust her narrative when she constantly claims she is being stalked by a gang she calls the three little pigs, shadowy men from her past who are the reason she is now in witness protection.

She’s cried wolf so many times that when a girl who looks remarkably like her is murdered, not even her witness protection officer believes she was probably the intended victim.

Frightened and alone, no wonder Joanne retreats into her childhood memories, of halcyon summer days spent with her cousin and best friend Foy, pretending they are royalty in their treehouse castle.

And gradually a troubling story emerges that helps explain why Joanne retreats into fantasy. For who could bear to face the truth of the life she is trying to escape from? And the very real danger she now faces alone.

Incisive, wicked, witty – author C J Skuse has such a wonderful way with words, setting dark scenes with perfect comic timing. She takes the most mundane of settings – a hairdresser’s reception area, a doughnut stall, a tired hotel – and makes it interesting. The people who inhabit her novels are ordinary folk with ordinary lives, made extraordinary by the plot in which they are unwittingly living, caught up in some small way with Joanne’s major troubles.

Like Sweetpea before her in C J Skuse’s debut novel (though less sweary), Joanne is a flawed character you’ll come to love for her vulnerabilities. A liar she may be, but she is also painstakingly honest with her emotions, a woman you’ll laugh with and cry for as she faces up to challenge in her own brave way.

The Alibi Girl is published by HQ