04 Mar The Animals At Lockwood Manor by Jane Healey

Posted at 09:37 in Literary Fiction, Wartime by Karen Byrom 0 Comments 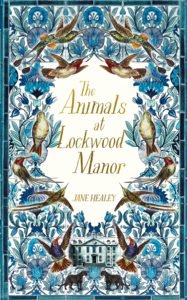 It’s 1939 and natural history museum curator Hetty Cartwright has been tasked with decanting the stuffed mammal section, along with other valuable material to Lockwood Manor, home of Lord Lockwood and his daughter Lucy.

Almost as soon as she arrives, things begin to go wrong. As specimens are moved, disappear and reappear, it’s clear that someone doesn’t want Hetty and her beloved beasts at Lockwood Manor. But is the agent of destruction human, or something otherworldly? With tales of a white lady haunting the stately home’s corridors, Hetty begins to wonder, and to fall prey to her own feelings of inadequacy as keeper of the museum’s lifeless treasures.

With Lord Lockwood unfriendly, and the servants resentful of the extra work, Hetty’s only ally is Lucy Lockwood, a young woman prey to all sort of fears and fancies herself. Haunted by a childhood growing up with a mother whose own grip on sanity was tenuous at best, and in turn petted and ignored by her father, who sets more store by his mistresses, she turns to Hetty for friendship and affection.

As events escalate at the manor, and their unseen enemy becomes ever bolder, can the two women between them keep the collection safe? And can they save each other from the lives of loneliness and isolation they led before they met?

Though the pace of the story is slow, the beautifully written narrative creates atmosphere and tension right from the beginning when Hetty arrives at the manor. Switching from both Hetty and Lucy’s point of view keeps the pace varied, and offers insight into the hearts and minds of the two characters – so similar in some ways and so different in others.

We’re also offered a glimpse into two different worlds – the rarefied atmosphere of the makeshift museum where exotic beasts from all over the world stare down at us with glassy eyes, beloved only by their odd curator; to the faux glamour of the aristocratic world, where gay dinners and parties mask the reality of disrepair, dusty rooms and a lonely girl who has grown into a lonely woman, beset by childhood secrets.