The Attic Child by Lola Jaye

03 May The Attic Child by Lola Jaye 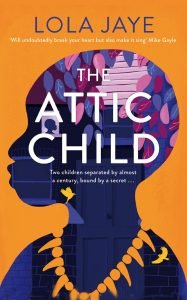 An emotional, perceptive and haunting mystery

Two children separated by almost a century, bound by a secret …

The intriguing introduction from the publisher to this story more than lives up to its promise from the very first pages, which take us straight to the heat and dust of Africa in 1903, where nine-year-old Dikembe chases geckos under the trees and dreams of joining his father and older brothers as they set off for work each day.

He’s unaware of the shadows of the Belgian occupation of the Congo, and what it will mean for his family and for him, until the day he is sent away by his mother to be a white man’s companion.

Explorer and self-styled anthropologist Sir Richard Cavendish takes the little boy to England, where he is renamed Celestine, and given a home and an education.

But these things come at a price, as Celestine is soon to discover. Alone and lonely, all he has left of his family is memories and a bone necklace given to him by his father.

How did that necklace end up under the floorboards of an attic, to be discovered by another lonely child?

In a dual timeline narrative, we switch to 1993, where 30-year-old Lowra is living life in London. Scarred by her childhood experiences, she is indifferent to her stepmother’s death and reluctant to return to the childhood home that holds so many unhappy memories for her.

But go back she does, to retrieve a bone necklace, a china doll and some scraps of writing she’d found under the attic floorboards as a child in the 70s.

With these clues, and the chance sighting of an old photograph of Celestine with his “benefactor” at a museum exhibition, Lowra sets out to piece together the mystery of who Celestine was and what happened to him.

Black historian Monty is eager to help her in his quest – for Celestine’s history is his history, and the shared story of all the people of colour who came or were brought to Britain over the centuries.

Between them, Monty and Celestine give us the underlying theme of the book – the experience of black people in a privileged white society.

In the 1900s, despite his education, intelligence and standing as Sir Richard’s ward, Celestine was regarded as a savage, an inferior, someone who could never quite be tamed and so posed a danger.

Monty’s experience reflects this. He’s British born, an eminent historian, yet his everyday life is a series of challenges, just because of his colour. Whatever he does and wherever he goes, people assume he is up to no good.

What a sad reflection on our society that even by 1993, things had changed so little.

But Celestine and Lowra’s shared experience can’t be denied either, and it’s a real hallmark of Lola Jaye’s intelligent writing that this comes out so strongly.

As Monty points out, Lowra may enjoy a life of unconscious white privilege (despite her childhood trauma) but as her and Celestine’s story gradually unfolds, the connection between the lonely little black boy and the unhappy young white child grows.

The pace of this story works so well – as the timeline switches from the early 1900s to the 1990s, we see both Celestine and Lowra develop from frightened children to people determined to take control of their own lives.

But an air of mystery and intrigue still permeates the pages – you need to know what became of Celestine, and what will become of Lowra.

Can there be a happy ending for either of them?

There certainly wasn’t for many of the children brought over from Britain to Africa in the years following emancipation.

As Celestine was soon to discover, the abolition of slavery did not mean that black people were truly free in a white person’s world. It was heart-breaking to see that happy little boy from the Congo gradually realise that his skin colour would always define him as less.

Uncovering his story certainly explains Monty’s continuing anger and helped me understand better why people truly believe that there should be no statues, monuments or celebrations of the people who exploited their fellow men, like Sir Richard.

Knowingly or not, they were complicit in the terrible crimes of slavery and genocide, and it is right that we question their place in the history books

Emotional, heart-rending and perceptive in its telling of the history of black people on the UK through one small boy’s experience, The Attic Child is a powerful story, clearly told, with a strong message for the reader. It’s not one I will forget in a hurry.

The Attic Child by Lola Jaye is published by Macmillan in hardback, RRP £14.99 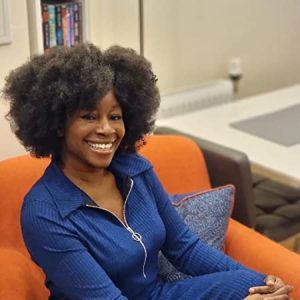 LOLA JAYE is an author and registered psychotherapist. She was born and raised in London and has lived in Nigeria and the United States. She has a degree in Psychology and a Masters in Psychotherapy and Counselling. She has contributed to the sequel to the bestseller Lean In, penned by Facebook COO Sheryl Sandberg, and has also written for the Huffington Post, CNN, Essence, HuffPost and the BBC.

She is a member of the Black Writers’ Guild and the author of five previous novels.

The Attic Child is her first epic historical novel, inspired by a photograph she saw at the National Portrait Gallery, part of an exhibition on Black British Victorians. 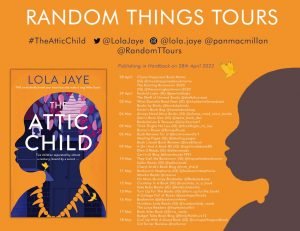 Thanks to Anne Cater of Random Things Tours for inviting me on this blogtour and to Macmillan for an advance copy of the book.