19 May The Babysitter by Phoebe Morgan

Posted at 09:35 in Crime, Domestic Noir by Karen Byrom 0 Comments 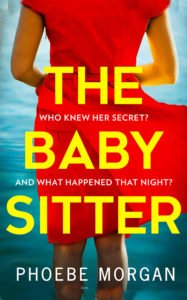 A murdered woman, a missing child? Story-telling doesn’t get any tenser than this!

A family holiday at your sister’s luxury villa in France – what could be more heavenly?

But for Siobhan Dillon, the dream becomes a nightmare when French police turn up to arrest her husband, Callum. His mistress Caroline Harvey has been found murdered in her home in Suffolk, her dead body draped over the travel cot of the baby she was caring for while its parents visited a sick relative in hospital.

But the baby herself has vanished.

UK police are convinced Callum is to blame, both for the murder of Caroline and the disappearance of little Eve Geras. But what could have been his motive? Where was his opportunity? And where is the baby? Is she still alive? As the days pass, hope fades – meanwhile, Callum strenuously denies everything. But not even his wife believes him.

In a deeply enthralling narrative, the truth gradually unfolds as we learn of events leading up to the murder from the two women closest to Callum – Siobhan and Caroline herself. Both loved him, both were betrayed by him – but is he a murderer? He’s certainly a deeply unpleasant character, full of superficial charm but unwilling and unable to sacrifice his needs and wants for the people he professes to love.

Siobhan is luckier than Caroline – she at least has her sister Maria and her teenage daughter Emma to comfort and support her.

Caroline has no-one – though all she’s ever longed for is a family, she’s had to be content with looking after her friend’s child – the child who has vanished.

Both Siobhan and Caroline are flawed but sympathetic characters, and you find yourself hoping that Callum will go down for the murder. But it’s so hard to see how it could have been him!

This story really does keep you guessing until the last page – both Siobhan and Caroline seem to be trustworthy narrators, and the police certainly aren’t holding anything back.

Tightly-plotted, suspenseful and with the story of a missing child at its core, this is one book you won’t put down till it’s finished!

Phoebe Morgan knows just how to keep her reader enthralled, and I’d highly recommend her other books, The Doll House and The Girl Next Door, too.

What’s it like to launch a book under Lockdown? Read my interview with Phoebe Morgan here.

Published by Avon on May 28 in paperbook, e-book and Audible formats