26 Nov The Betrayals by Bridget Collins 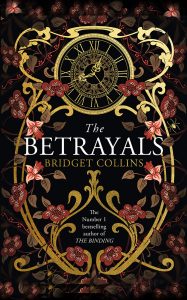 Dangerous games in a Dystopian world lead to a thrilling read

In the dystopian world in which this novel is set, the Party rules over all – and when culture minister  Leo Martin dares to disagree with the prime minister over the banning of books, he is banished to Montverre, the school where talented boys are sent to learn the “grand jeux”- games of poetry, maths and motion which are considered the national game.

An alumni of the school, and one-time gold medal winner, Leo is reluctant to go back there, for his time at the school holds unpleasant memories, which are gradually revealed through the diary he kept at the time. His brittle relationship with aloof genius Carfax de Courcey ended in tragedy – and now Carfax’s sister Claire is Magister Ludi at the school, she does not seem inclined to forgive and forget Leo’s  betrayal of her brother.

But as they reach a new understanding it looks as if history might repeat itself – will Leo now betray Claire to save his own skin?

It took me some time to get into this story, mainly because I was trying too hard to understand just what a grand jeu is – I found it impossible, and my tip to fellow readers would be don’t worry about it. Just concentrate on the characters, who grow in strength and stature as the book progresses, and on the plot, which unfolds in a narrative of past and present events that segue together seamlessly in a breathtaking finale. – with a few surprises along the way!

Though the story really is about the relationship between Leo and Claire, the background lends a real air of suspense to the whole narrative. Just what did happen between Carfax and Leo? When will the party pounce?

And who is the elusive “rat” girl who inhabits the very fabric of the school – is she a person or a ghost, or a metaphor for the underlying menace that stalks the somewhat privileged pupils of this establishment.

The prose and pacing of this story is perfect – and though the author says she owes her inspiration to Herman Hesse’s The Glass Bead, the plot and writing reminded me of Donna Tartt’s Secret History, one of my favourite books.

Published by The Borough Press in hardback, RRP £14.99