17 Nov The Chalet by Catherine Cooper 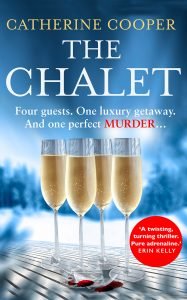 Over twenty years ago, two brothers went missing during a snowstorm on a ski-ing trip off-piste. Just one was found – the body of the other was never recovered. Though the ski guides, Cameron and Andy were questioned, no blame was ascribed, and the incident was put down as a tragic accident.

Fast forward twenty years and we’re back in the same ski resort, living at a luxury lodge with Hugo and Ria, who have rented it to impress Simon, whom they’re hoping will back their travel business. Simon brings along his young wife Cass and their nanny Sarah.  Also a constant presence at the chalet are Millie, the chalet maid, Matt, who manages the chalet chain, and Cameron, the owner – yes, the same Cameron caught up in the ski-ing incident years ago.

From there events unfold. Told from multiple viewpoint, including that of the girlfriend of the missing skier, we gradually learn what happened in the past.  It quickly becomes clear someone in the present day is out for revenge – but who?

As the snowstorms rage and events escalate, it looks like there will be more victims from the fallout of the past.

I can’t say more without giving things away – let’s just say that this is a very satisfying mystery with lots of plot twists and turns, and a cast of players whom you’ll probably initially dislike. But as you get to know each one, their thoughts, fears and motivations, you’ll find yourself warming to the unlikeliest of characters.

The changes of viewpoint can occasionally be a bit discombobulating, and there is at least one deliberate red herring to put you off the trail of the truth, but overall this is a strong story that will satisfy the souls of ardent suspense thriller fans.

The Chalet is published by HarperCollins in paperback, RRP £7.99