The Cold Killer by Ross Greenwood

Posted at 08:16 in blogtour, Crime, Thriller by Karen Byrom 0 Comments 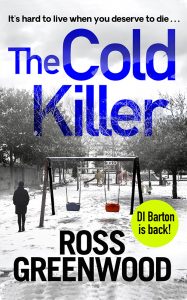 After a run of light Christmas romances, it’s time to turn my attention back to crime thrillers!

The Cold Killer by Ross Greenwood opens with a violent and graphic scene as DI Barton and DS Shawn Zander are called to an altercation at the home of Archibald Spencer, one-time master criminal whom Barton has never been able to bring to justice.

There’s a chainsaw and much blood involved, but as usual, Spencer slips the grip of the long arm of the law.

Meanwhile, in a nearby prison cell, a violent serial criminal looks bleakly ahead to his release. But before that he must survive a few weeks in the Vulnerable Prisoners Unit, where sex offenders and child murderers are kept apart from the rest of the prisoners.

Our prisoner recognises one Frank Zanthos, serving time for sexual crimes against children.

When he turns up dead in his cell, Barton heads the routine investigation – but he isn’t wholly convinced Zanthos died of natural causes. And as events escalate outside the prison following the release of Zanthos’s partners in crime, he soon begins to suspect that there is a serial killer on the loose.

Someone, somewhere has been touched by their crimes and is serving up a cold and calculated revenge.

A determined team of detectives – tick

Drama on every page – tick

It’s an enthralling read. But I do have to give you the caveat that it can also be a disturbing read at times, delving as it does into the minds of people who are apologists for their awful crimes against children.

Balancing this is the strong and humble humanity of John Barton. He is an empathetic, sympathetic character, a family man who treads the tricky line between work and home, and is devoted to his dear mother, a dementia sufferer.

Another strong character is the prisoner, whose identity we don’t learn until later in the book. Despite their differences, he and Barton are in some ways yin and yang, complementing each other’s fierce desire for justice for the victims of a heinous crime. They just go about it in different ways.

They also both have a vested interest in seeing Archibald Spencer, our chainsaw wielding maniac, brought to book – his part in the story is skilfully woven in to the main narrative.

With such perfect plot weaving from Greenwood, there’s no way of guessing this story’s outcome, yet the denouement, when it comes is a wonderful “aha” moment for the reader.

What I like best about this book is that in a story of such horrific crimes, the author presents us with a perpetrator who portrays that not everything is black and white, that there’s the possibility of redemption for the most hardened criminals, and that justice will always be served in the end.

Perfect for fans of Mark Billingham and Ian Rankin,
The Cold Killer by Ross Greenwood is available from Amazon

Ross Greenwood is the bestselling author of eight crime thrillers. Before becoming a full-time writer he was most recently a prison oﬃcer and so worked everyday with murderers, rapists and thieves for four years. He lives in Peterborough. 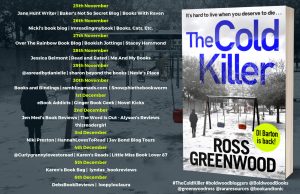