The Collector’s Daughter by Gill Paul 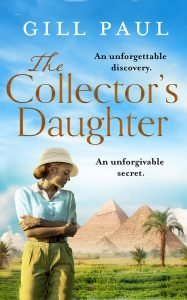 Does a pharaoh’s curse follows her through life?

I love Gill Paul’s historical novels about real-lfe people – she always adds an element of mystery and intrigue to stories that we think we know well, and this account of the life of Evelyn Herbert, daughter of Lord Carnarvon who along with Howard Carter discovered Tutankhamun’s tomb in 1922, is no exception.

A young woman of 18 when she first accompanied her father to Egypt, we first meet Eve in her 70s in 1972, after a series of strokes that are gradually destroying her memories. As her beloved husband Brograve and a visiting Egyptologist Dr Ana Mansour try to coax back her memories, she recalls the discovery of the tomb – but will she ever remember just what she, Carter and her father did that had to remain a secret until now?

This is such an intriguing story from the start. Eve’s an immediately sympathetic character, and the mystique and glamour of her ties with the discovery of Tutankhamun would engage even the least historically-minded reader – and I can’t imagine there are many of them!

There’s the further intrigue of the curse of Tutankhamun, the mystery of a missing gold box filled with powerful unguents, and wonderful descriptions of life in the 1920s for a spirited young woman, both in Egypt and in the UK.

Put them together, and you have all the ingedients for a great story. With Gill Paul in charge of the mixing, this book could not fail – her historical research is meticulous, while her own interpretation of events injects romance, excitement and passion for the past into every page.

As an aside, for Downton fans, the story also brings to life the heydays of Highlclere, Eve’s ancestral home and now the setting for the Downton Abbey films.