Posted at 10:07 in Best-selling Author, Crime by Karen Byrom 0 Comments 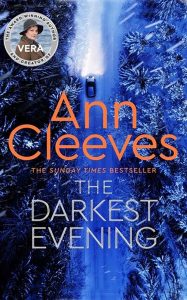 An abandoned baby, a murdered mum – Vera is back with a chilling new case!

On a cold, dark night near Christmas, Detective Vera Stanhope loses her way home in a snowstorm and stumbles across an abandoned car with a baby boy in the back seat. Perplexed she takes him to the nearest house – which just happens to be her ancestral home, Brockburn House, still owned by the relatives of her black sheep father.

They’re in the middle of a dinner party hosted by Juliet Stanhope’s theatrical husband, Mark Bolitho. As Juliet fusses over the baby – she’d love one of her own – farmer Neil Heslop appears to pick up his daughters, who are waitressing for the dinner party. In dramatic murder-mystery fashion, he announces there is the body of a young woman at the back of the house. She’s been brutally killed.

The woman is quickly identified as Lorna Falstone, mother of the abandoned baby, and Vera’s investigation into her murder begins. Ably backed by her usual team, Joe and Holly, they delve into the young woman’s past, to uncover secrets that suggest the murderer of the troubled young single mother may be close to home. Her parents, her friend Josh (son of the farmer who found the body) the baby’s unknown father , the Stanhopes’ dinner party guests – all come under suspicion. Could it even be one of the Stanhopes, struggling financially to protect their home and estate?

When another woman goes missing, one with close links to Lorna, Vera, Joe and Holly redouble their efforts in an investigation that takes our beloved detective into very real danger of her own!

As you’d expect from a writer of Ann Cleeves’ calibre, this is thrilling stuff. The plot is tight, the, characters convincing, the twists unexpected and the denouement wholly convincing. It’s a classic Vera story.

As befits a country house murder mystery, gossip and rumours help drive the narrative forward, along with good old-fashioned police work. There’s a sinister atmosphere beneath the ordinary lives of the gentry, farmers and local townsfolk that keeps the atmosphere here as chilling as the snow and frost that transforms the surrounding woods and fields into a winter wonderland hiding sinister secrets.

But what really made this book perfect for me was the personal element of the case to Vera. Fans already know her as a down-to-earth woman who lives alone with few close friends, and whose life is mostly all about work. But her relationship with the Stanhopes here emphasises her isolation from a close family group. She’s an outsider looking in, unwelcomed by her cousin Harriett, Juliet’s mother, who is determined to keep the Brockburn estate safe in her husband’s branch of the family. Vera’s reaction to her cousins, her pity for the little baby who’s lost his mum, and her wistful longing that things might be different add a whole new dimension to her character.

In almost all Vera’s investigations, family background matters. The Darkest Evening is no exception, and all the better for Vera’s personal involvement with the tragic case.