04 Aug The Dover Café At War by Ginny Bell

Posted at 10:23 in Nostalgia, Saga, Wartime by Karen Byrom 0 Comments 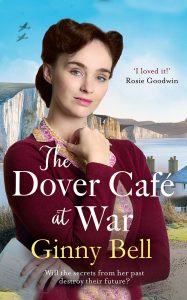 It’s the eve of WWII and local café owners the Castle family keep the townsfolk of Dover fed at their bustling tables, which matriarch Nellie rules with a rod of iron. In the kitchen is her daughter, Marianne – unmarried mother of 10-year-old Donny, product of a brief liaison when she was just 16. Shunned and shamed by her neighbours, Marianne now gives men a very wide berth.

Sister Edie works as a mechanic at a local garage, while younger sister Lily, still at school, plans to train as a nurse. Their brother Rodney works for the government at Dover Castle, while their other brothers, Bert and Jimmy, are privates in the army.

With illicit affairs, small town gossip, forbidden love, and mystery and danger (in the shape of a strange man lurking around the café, with an unhealthy interest in both Marianne and Donny) the scene is set for epic drama that embraces the themes of war, community, family, scandal and romance.

The story is well told, with strong, sympathetic characters. The focus is on Marianne, who is forced out of her shell by the events going on around her – not least her meeting with her brothers’ army colleague Alfie Lomax. But before she can find happiness, she must learn to forgive herself – not easy when even her mother constantly throws her disgrace in her face.

Nellie and the rest of the large Castle family all have vital roles to play in the narrative. As time moves on, Marianne’s younger siblings gradually come to the fore, each with their own drama to play out on the wartime stage.

As a typical wartime saga, this is a highly readable, enjoyable book, but this time I was gripped in an extra way by the mirror the effects of war on the homefront holds up to our current lives in the middle of the Covid pandemic.

Like us, the Castle family live with fear and uncertainty. Like us their way of life is changed overnight, with large gatherings banned, the cinema closed, curfews in place, long queues at the shops, the uncertain situation killing the townsfolks’ trade. They have to carry masks with them. They face an unseen enemy that could bring death.

That is not to belittle their situation in comparison to ours – living through wartime must be truly dreadful, but until our own, less dangerous but still scary predicament, I don’t think I’ve appreciated before just how frightening and unsettling it must have been.

Author Ginny Bell does a superb job of portraying wartime life through civilian eyes. The Castle family, their friends and neighbours, will get through this. Of course, there will be some casualties, but their courage, resilience, humour and strong sense of duty will ensure their way of life survives.

The action in this first book of a proposed Dover Café series takes us to 1940 and the evacuation of Dunkirk. There’s lots more to come, and I’m really looking forward to following the adventures of the Castle family and the challenges they face in the next book.

Published by Zaffre in paperback, RRP £8.99, on September 17.
Available now in ebook and Audible format