The Flames by Sophie Haydock

23 Mar The Flames by Sophie Haydock 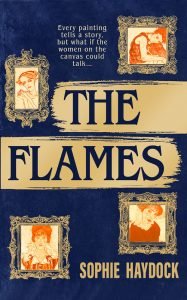 Portrait of the artist’s Muses

I love a novel based on real-life people who led intricate and interesting lives.

But I have to confess I had never heard of the early 20th century Austrian artist Egon Schiele when I picked up this book, though I had, of course heard of his mentor Gustav Klimt. I’ve even got a tote bag woven with the design of The Kiss, Klimt’s most famous painting.

But who are the women in the portraits?

His sister, favourite model, wife and sister-in-law all served as Schiele’s Muses and together their narrative not only sheds light on their own lives, but also offers a wonderful portrait of man whose genius made him egotistical and self-centred, but also passionate, with a great capacity for love.

It also highlights what life was like for women of different classes in the early twentieth century.

But first we fast forward to 1968,  to Vienna, with a young woman Eva literally bumping into an old bag lady, Adele Harms, who is searching for her sister Edith.

The narrative then returns to 1912 when Adele and Edith, rich young society women, first meet the artist. Adele immediately has designs on the young man dogged by scandal, and sets out to enchant him.

As the story of her relationship with Egon fades out, it’s replaced by that of his sister’s Gerti, with whom he had an intense, almost incestuous relationship, sketching her in poses no brother should ask of a sister. From her we learn about his troubled childhood with a father driven mad by syphilis, and a mother and sisters all looking to him for support.

He moves to Vienna, and his principal muse and model, Vally, takes over the story, showing us yet more facets to his character before finally, her account is superseded by that of the woman he eventually chooses as his wife.

In between each woman’s narrative, we’re returned to 1968 Vienna. Will Adele, with Eva’s help, finally find redemption and forgiveness from her sister, whom she betrayed in a terrible way?

What a powerful and immersive story this is of four fascinating women.

Adele is a spoilt, selfish, bossy and rude – an almost Scarlett O’Hara character in a desire to get her own way. But you can’t help but sympathise with her.

Edith is warmer and gentler, but with her own steely determination.

Gerti is passionate, like her brother, but enigmatic, too.

But for me Vally is the real star of the story. With very few resources, she finds a way to survive in the world, never sacrificing her own principles for love or money.

Author Sophie Haydock captures the atmosphere of early twentieth century Austria, whether she’s introducing us to another world of glittering social events in Vienna in the years before WWI, or taking us to the sleepy towns and villages where Egon would try to settle, vainly combating the bigotry and outrage of his neighbours. For his work was considered by many to be poronographic, and his influence on young folk to be actually criminal!

As an enfant terrible of the art world, Egon suffers for his art, and so, too, do his four Muses – yet each retains her dignity and sense of self-worth in the rapidly changing world of Europe at war.

In her own way, each woman is a feminist before her time, overcoming the strictures of the class they’re born into it, and the mores of the age. Though drawn to the artist like a moth to a flame, they are flames in their own right.

Adele, Gerti, Vally and Edith – they truly are the flames that light up the artist’s life, illuminating his story while each burning brightly herself.

Howe sad that some were snuffed out too soon. But their legacy lives on, in Schiele’s beautiful paintings and in this mesmerising, fictionalised account of all their lives.

Eva, the young woman whose actions provide a cipher for Adele’s story, does not figure strongly in the main narrative, but nevertheless is important to the story, too. In 1968, women still don’t have any real independence, but maybe Adele’s story will enable Eva to take control of her own life, just as each of the Flames did for their own lives over fifty years before.

The Flames by Sophie Haydock, published by Doubleday, is available in hardback and ebook. 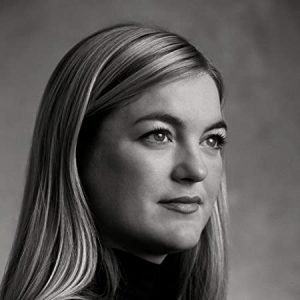 SOPHIE HAYDOCK is an award-winning author living in east London. The Flames, is her debut novel. She is the winner of the Impress Prize for New Writers. Sophie trained as a journalist at City University, London, and has worked at the Sunday Times MagazineTatler and BBC Three, as well as freelancing for publications including the Financial Times, Guardian Weekend magazine, and organisations such as the Arts Council, Royal Academy and Sotheby’s. Passionate about short stories, Sophie also works for the Sunday Times Audible Short Story Award and is associate director of the Word Factory literary organisation. Her Instagram account @egonschieleswomen – dedicated to the women who posed for Egon Schiele – has a community of over 110,000 followers, and continues to grow. For more information, visit sophie-haydock.com. 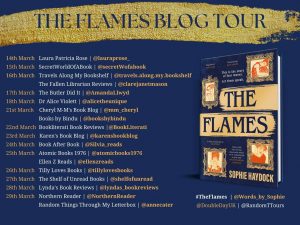 Thanks to Anne Cater of Random Things Tours for inviting me on this blogtour and to publisher DoubleDay for a copy of the book in exchange for an honest review.