07 Feb The Foundling by Stacey Halls

Posted at 16:03 in Literary Fiction by Karen Byrom 2 Comments 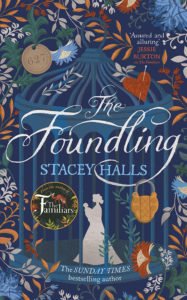 A mother’s love knows no bounds.

In mid-eighteenth century London, an unmarried mother had few choices. She could leave her baby to die in the gutter or take it to the Foundling Hospital, hoping it would live until she had saved enough money to reclaim it.

The Foundling Hospital didn’t guarantee a place – a cruel lottery, watched avidly by the cream of society, determined whether or not the baby would be taken in.

Bess Bright’s new-born daughter Clara was one of the lucky ones – or so Bess thought at the time.

She left her little daughter in the Foundling’s care, with a token that she would return one day to claim her. A piece of scrimshaw, half of a broken heart, inscribed with her initial and Clara’s – it was all she had to give, and her only reminder of Clara’s father, a whaling merchant who’d died of fever without ever knowing the predicament he’d left Bess in.

Heavy-hearted, Bess returned to her old life as a shrimp hawker, living with her father Abe and brother Ned in mean apartments near Billingsgate. But she scrimped and saved, and six long years later determined the £2 she had scraped together was enough to redeem her daughter.

But what a shock lay in store for Bess, when kindly Doctor Mead told her that Clara had been reclaimed the very day after she’d left her at the hospital. The woman had claimed to be Bess, knew her name and address, her profession and the details of the token Bess had left.

Who was the woman? How could she have known of Bess’s circumstances? And where had she taken Clara? Bess did not know – but she was determined to find out.

Meanwhile, on upper-class Devonshire Street, widowed Alexandra Cassons lived a life of seclusion with her young daughter, Charlotte, venturing out only to the church which Dr Mead also attended. It was he who suggested Alexandra hire a nursemaid for Charlotte.

Reluctantly, she allowed Eliza Smith into her home and into Charlotte’s heart. And slowly, her world began to fall apart.

Stacey Hall’s debut novel The Familiars was a sensational masterclass in historical drama, capturing the atmosphere of Jacobean England at the time of the Pendle witch trials.

The Foundling is a worthy follow-up. Eighteenth century London is vividly described in sights, sound and smell. From the comfortless slum Bess inhabits to the busy streets where she plies to her trade to the rarefied atmosphere of Devonshire Street, with its cosy rooms and quiet servants, you can imagine yourself there.

And like The Familiars, the story concentrates on the strength and endurance of two very different women. Both have suffered tragedy, yet neither can comfort the other. For their only common bond is the child they both adore.

Other characters flit in and out – alcoholic Ned, stoic Abe, Bess’s friend Kezia, lamplighter Lyle, Alexandra’s sister Ambrosia – all add to the noise, life and colour of the story. Each have their part to play, but in the end Bess must rely on her own wits to reclaim her daughter. Will they be enough?

I loved this book, and was fascinated to read the inspiration behind it. Stacey Halls’ story was inspired by her visit to the Foundling Museum, formerly the Foundling Hospital in Bloomsbury, where she saw for herself the poignant tokens left by heartbroken mothers, their only link to the children they left behind.