11 Jan The Girl With The Louding Voice by Abi Dare 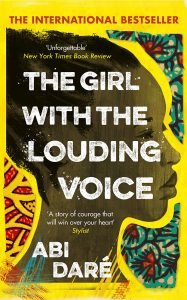 Can Adunni make herself heard in a world where young women struggle?

This wonderful debut novel takes us to Nigeria and the challenges faced by a naïve yet wise teen girl.

It’s 21st century Nigeria, but when motherless Adunni is sold into marriage by her father at just 15, it looks as if all her hopes and dreams for bettering herself through education have come to an end.

Life is hard at her abusive, ageing husband’s house, but Adunni finds a friend in his older wife Khadija. Then tragedy strikes and Adunni has to flee her home and family. Fearful for her life, she takes refuge with an old friend of her mother’s who arranges for her son to find her a job as a housemaid in Lagos.

But it looks as if it is out of the frying pan and into the fire for poor Adunni. Her mistress, Big Madam, is cruel and physically abusive while her master the Chief is a lascivious man with designs on our young heroine.

How will Adunni escape her fate? She’ll need all her spirit, courage and wisdom is she is not only to survive but thrive! Fortunately, there are kind people around her, including Big Madam’s chef Kofi, and her neighbour Mrs Tia. Both are determined to help Adunni in her aim to make her voice “louding” through education, and to devote her own life to the betterment of all the girls who will come after her.

This was the most amazing read. From the very beginning I was immersed in the sights, sounds and smells of Nigeria, drawn into Adunni’s life, so very different from my own. And yet Adunni is so like the rest of us, too, a female who knows she is entitled to have her voice heard. But she has such a fight on her hands in the patriarchal society she lives in, where not only Adunni, but the women around her give way to their menfolk. Even Big Madam, powerful though she seems, is vulnerable to the Chief’s whims.

There’s a little mystery here in the question of what happened to Rebecca, Big Madam’s former maid, and there is tension and suspense as Adunni plots her way out of the modern-day slave situation she finds herself in.

But the absolute charm of this book is Adunni herself. Whether grieving for her mother, playing with her brother, enduring her husband’s attentions or submitting to Big Mama, she is such an honest, naive yet wise narrator. She may be beaten, but she is never cowed – she sees wonder in her surroundings and the good in just about everyone.

Her staccato English tells her story loudly and proudly – despite everything, she loves her country and its people, and wants to do what’s right not just for herself, but for them … because it seems from this story that the majority of the women of Nigeria, despite 21st century advances, still have a way to go to catch up with their European peers in gaining equal standing with men.

Though the narrative is about Adunni’s louding voice, I liked the way that the story was, in the end, about all women no matter how privileged they seemed, finding their voices in a patriarchal world.

The Girl With The Louding Voice by Abi Dare is published by Sceptre in paperback, RRP £8.99

Abi Dare grew up in Lagos, Nigeria and has lived in the UK for over 18 years. The Girl With The Louding Voice, her debut novel, won the Bath Novel award.