03 Jul The Half Sister by Sandie Jones 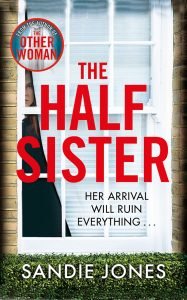 Tension and drama runs high when Kate and Lauren gain an unexpected sibling!

A twisty, psychological drama, The Half Sister introduces us to sisters Kate and Lauren and their mother Rose. Their world is rocked by the arrival of 22-year-old Jess, who turns up out of the blue to disturb their Sunday lunch by announcing that she is the illegitimate daughter of their late father and husband, Harry.

Each sister reacts in a different way. Lauren, who had an uneasy relationship with Harry, is inclined to accept and believe Jess’s story. Kate, on the other hand, refuses to countenance the thought her beloved father could ever have betrayed his family so heartbreakingly. An investigative journalist, she sets out to discover the truth about Jess.

But in doing so, she uncovers some disturbing secrets about her own family. Never mind trusting Jess – can she even trust that Lauren and Rose haven’t been hiding things from her?

As the thrilling narrative unfolds, Jess inveigles her way into the family’s lives, and events build to a climax as chilling as it is inevitable. Will life ever be the same for the family again?

I was hooked by this story from the very first page, when we meet Kate as she’s about to undergo her fourth round of IVF. Quickly established as a sympathetic character, she’s the one we want to believe and trust in. But then the narrative introduces us to Lauren, and suddenly our loyalties are torn. With three young kids and an overbearing husband, surely she deserves our sympathy and understanding. And what of Rose, still grieving for her husband only to find his fidelity is in doubt?

The relationship between the two sisters, each jealous of what she believes is the perfect life her sibling leads, is as much part of the drama of this story as the underlying mystery of Jess.

So what of Jess and her motives? Is she who she says she is? A daughter of Harry, abandoned as a newborn to be brought up by another family? And if she is not who she says she is, then who is she, and why has she targeted Kate’s family?

So many secrets! So many twists and turns! The clues are there – cleverly dropped by the author in a well-crafted narrative, but this is a story that will keep you guessing. Just when you think that you’re one step ahead of the plot, there’s another surprise in store, to distract you from what you thought was true and lead you down another path.

Tension and feelings run high as you’re caught up in the drama of all three of the sisters’ lives – like Kate, you’ll want to know the truth so much, that you won’t be able to put this book down till it’s finished. 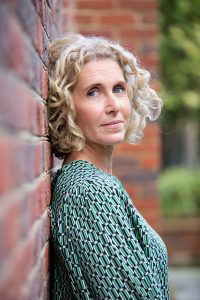 Sandie Jones is the author of psychological thrillers The Other Woman and The First Mistake. A freelance journalist, she has contributed to the Sunday Times, Daily Mail, Woman’s Weekly and Hello magazine, amongst others. If she wasn’t a writer, she’d be an interior designer as she has an unhealthy obsession with wallpaper and cushions. She lives in London with her husband and three children.

Thanks so much to Ellis of Pan Macmillan for inviting me on this blog tour – and for introducing me to the novels of Sandie Jones. The Half Sister is the first one I’ve read, and I’m already eager to explore her back catalogue, which includes her debut The Other Woman and its successful follow up The First Mistake. 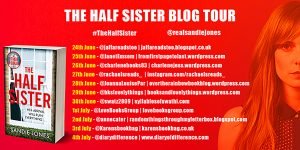