The Heron’s Cry by Ann Cleeves 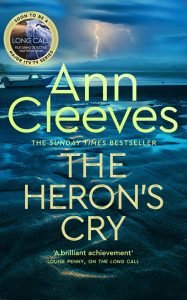 Nigel Yeo was a lovely man – so who would want him dead?

That’s the question facing Detective Matthew Venn and his team – Jen Rafferty and Ross May – when the widowed head of North Devon Patients Together is found murdered in his daughter’s glass-making studio, a glass shard from one of her own creations still protruding from his neck.

Cruelly, it is his daughter, Eve, who finds him. But she can shed no light on her father’s killer.

As Venn digs into Yeo’s past, he discovers that he had been conducting an investigation into the local health trust over the alleged failed treatment of Mack, a young man who committed suicide. It’s a promising trail.

But when another murder is committed, the detective team’s focus shifts on to the local community as a tale of tangled relationships emerges in which everyone knows someone connected to the victims …

Will Venn, Rafferty and May get to the truth before there is yet another murder? In a tense race against time, they must put aside personal feelings of friendship and sympathy for their neighbours and start digging deep into their lives.

As you’d expect from the masterly pen of Ann Cleeves, this is such an engrossing read. Not only does she bring us an intriguing and wholly convincing murder-mystery, she introduces us to, and immerses us in, the lives of the characters.

She gives each and every one of them, no matter how seemingly minor, an interesting story of their own.

There’s Frank Ley, local philanthropist and landlord, who is conflicted by guilt over his riches; Cynthia Prior, socialite wife of the hospital trust’s chair; John and Sarah, struggling farmers on Ley’s land; Janey Mackenzie, grieving sister of the suicide victim Mack; Lucy Braddick, a young Down’s Syndrome woman with keen powers of observation who’s helped Venn solve a case before.

All have their part to play in the unfolding story.

At the same time, Ann Cleeves develops the character and story of her main player, Matthew Venn, (just as she did with Shetland’s Jimmy Perez and continues to do with Vera Stanhope).

If you met him in The Long Call, you’ll already know he’s a taciturn but deeply emotional man, conflicted by his childhood brought up in the Brethren. Neither the religious community nor his family could accept his sexuality and even though Matthew is now happily married to husband Jonathan, the hurt he feels runs deep in his veins. Always aware of how his actions affect people around him, he never bulldozes his way through an investigation, but calmly and methodically works his way towards the truth.

Ross May is the antithesis of his boss, keen to get out and get going, and often oblivious to the needs of others, a trait that increasingly impacts on his family life.

Jen, meanwhile, a single mother of two teenagers, is conflicted between duty and friendship for Cynthia, at whose party the whole story began.

But The Heron’s Cry is not just about the mystery, nor the characters nor even the setting of north Devon, which the author eloquently describes in lightning penstrokes that convey the beauty of the wetlands, the bustle of the pub, or the claustrophia of a farm cottage so effectively.

It also touches on the very pertinent issue of mental health issues, particularly amongst men, and a system that so often fails them.  It extends beyond Mack – in Matthew’s conflict between duty and love, in Ross’s questioning of his own behaviour towards his wife, and in Jen’s concerns for her computer-obsessed teenage son, we’re reminded that life can be tough, but that it is always precious.

Murderers must be brought to account, and thankfully, in Matthew and his team, Ann Cleeves has brought us another set of strong, resourceful characters who do just that in a story that’s dramatic, intriguing, beautifully paced and above all, page-turning!

The Heron’s Cry by Ann Cleeves is published by Pan Macmillan in hardback, RRP £20. Also available in ebook. 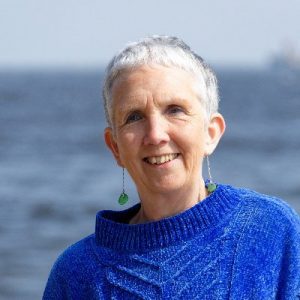 Ann Cleeves is the author of over thirty critically acclaimed novels and is translated into as many languages. She is the creator of popular detectives Vera Stanhope and Jimmy Perez who can be found on television in ITV’s Vera and BBC One’s Shetland. The TV series and the books they are based on have become international sensations, capturing the minds of millions worldwide. Sunday Times number 1 bestseller, THE LONG CALL, was the first in Ann’s Two Rivers series set in Devon, and is now in production for an ITV drama.

Ann moved to North Devon when she was 11 years old. Before then the family lived in a tiny village, and as the headmaster’s daughter she always felt like the outsider at school. But in Barnstaple, Ann found a real home. She made life-long friends and fell in love with the beautiful North Devon coast, which still has a very special place in her heart. She worked as a probation officer, librarian, bird observatory cook and auxiliary coastguard before she embarked on her career as an author.

Ann’s been awarded the highest accolade in crime writing, the 2017 CWA Diamond Dagger, and is a member of ‘Murder Squad’, working with other British northern writers to promote crime fiction. A passionate champion for libraries, she was a national libraries Day Ambassador in 2016. Her new ‘Reading Coaches’ project, providing support for health and wellbeing in communities, launches in the North East this summer. Ann lives in North Tyneside near where the Vera books are set. 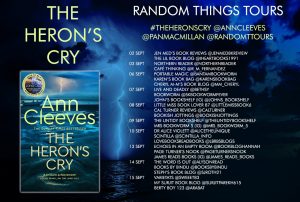 The Heron’s Cry is a stand-alone story but if you’re interested in the first book featuring Matthew Venn, soon to be a TV series on ITV, click here for a review of The Long Call