The House Beneath the Cliffs by Sharon Gosling

23 Aug The House Beneath the Cliffs by Sharon Gosling 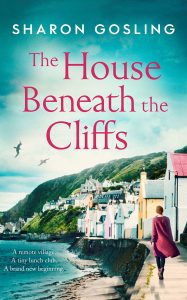 Drama and romance on a storm-lashed Scottish coast!

When chef Anna Campbell finally makes the break with her controlling boyfriend Geoff, she leaves behind not just him, but her home and her job in London and buys a small cottage in the tiny Scottish village of Crovie, sight-unseen.

When she gets there, she’s dismayed to discover how much work it needs – and even more upset to discover that she’s already made an enemy in curmudgeonly old Douglas McKean, who thinks the cottage, charmingly named FisherGirl’s Luck, should be his.

But her other neighbours rally round, and soon Anna is settled in her new home, cooking up delicious lunches for them with help from an old recipe book she discovers tucked away in the cottage, left behind by previous owner Bren.

This gives her the idea to open a lunch club, serving meals to passing visitors. It’s an instant hit, and her fame grows.

Meanwhile, she’s enjoying her growing friendship with widower Robbie McKenzie and his young son Robbie. But with “auld” Robbie still grieving for his wife, she knows there can be no future for them.

Still, things are looking bright for Anna – but storm clouds are gathering, both metaphorical and physical, that threaten to destroy her new found contentment.

This was a compelling read, with plenty of drama and romance. From the moment Anna sets foot in Crovie (a real-life village on Scotland’s east coast) the reader is immersed in the atmosphere and caught up in the action.

The characters in the village soon feel like friends. Anna herself is a very empathetic person, and her neighbours (with the exception of Douglas) are all appealing – especially Robbie, whose grief adds an extra dimension to his solid, unpretentious masculine charms!

In such a storm-swept location, there’s always a sense of physical danger in the background, which adds extra tension to the plot and gives the story a wonderfully dramatic ending!

Add to this the smouldering passion that neither Anna nor Robbie will acknowledge, the rumble of the storm clouds and the jealous beat of Geoff, still trying to control things in faraway London – what an exciting, romantic and compelling read!

The House Beneath The Cliffs is published by Simon & Schuster in paperback, RRP £8.99