Posted at 09:00 in Best-selling Author, Crime by Karen Byrom 0 Comments 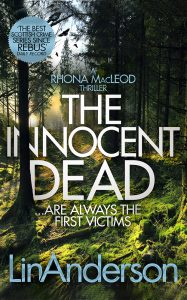 Will the ghost of wee Mary McIntyre ever be laid to rest?

Disclosure time! I’m a proud Scot and a proud fan of crime fiction, which is showcased every September at Bloody Scotland, the International Crime Festival that brings together the best of crime fiction writers from Scotland and around the world every year in Stirling.

This year’s pandemic has put paid to a visit to Stirling, but the good news is that Bloody Scotland is going ahead online with the chance to listen to loads of brilliant writers, among them the incomparable Lin Anderson (co-founder of Bloody Scotland) whose new book The Innocent Dead has just come out!

Believe it or not, it’s book 15 in her series about Rhona McLeod, the Scottish forensic scientist whose expertise and empathy has helped solve so many crimes. In the very first novel, Driftwood, she is called upon to investigate the murder of a teenage boy who could be her son – now, in The Innocent Dead, her skills are needed to solve another child murder – one which took place many years ago.

In a gruesome start to the story, wild swimmers at a raised peat bog on Scotland’s west coast are horrified to see a small leathery hand protrude from the peat. When Rhona is called in to exhume the body and examine the site, she discovers the remains of a girl aged between 10-14. But this is no ancient burial site – the girl’s head lies on a plastic bag which contains a confirmation dress, veil and shoes.

Though the body’s preserved, identification isn’t straightforward, but all indications point to it being that of Mary McIntyre, an eleven-year-old who went missing on her confirmation day, 45 years ago.

So as Rhona and her assistant Chrissy concentrate on the forensics, DS Michael McNab and his partner DS Janice Clark reopen the police investigation into the historic case, revisiting the original groundwork carried out by former DI Jimmy McReadie. Also on board is criminal psychologist Magnus Pirie, whose work with sex-offenders makes him an invaluable part of the team.

As old witnesses and suspects are questioned, a grim story begins to emerge of Mary’s short life, but nothing brings her more vividly to life than the recollections of her childhood friend, Karen Marshall. Now a widow living in Stirling, she has but hazy recollections of the day her chum disappeared for ever. But with the discovery of the body, her memories are returning – and that could put her in deadly danger!

This is an utterly enthralling story. The image of a body in a peat bog captured my imagination immediately, and the pathos of it belonging to a young girl, killed in my own lifetime rather than ceturies ago, added a haunting element to a narrative thrumming with mystery and menace.

The plot is so perfectly paced that, even as we’re building a picture of the past in tandem with Rhona and her colleagues, we’re never quite sure who or what to believe. There are so many suspects to keep you guessing: Alec, the then-teen delinquent turned predatory paedophile who has just been released from jail; Father Feeney, the creepy parish priest; Mr McIntyre, Mary’s violent father; even her brother Robbie comes under suspicion.

Yet the clues are there, and the denouement, when it comes, is highly satisfactory.

Then of course, there’s the setting. From the working-class streets of Glasgow, to the magnificent Scottish moorlands hiding their dark secrets, to the brooding majesty of Stirling Castle, we’re immersed in place and time, while lost in murder-mystery.

But what really makes this book so gripping is its characters. There’s Karen, a sad figure, grieving, lonely and ravaged by guilt, whose presence in the story adds greatly to its haunting element; McReadie, who still wants and needs to solve the case; the witnesses; the suspects; and, of course the investigators, Rhona, Chrissie, Michael and Janice. Their ordinary day-to-day lay lives go on in tandem with their investigation, bringing them fully to life even as they investigate the secrets of the dead, a little girl whose white dress and veil add poignancy to her innocence in the face of evil.

Published by MacMillan in hardback, RRP £14.99

Thanks to Ellis Keen of Pan MacMillan for inviting me on to this #blogtour and for the copy of the book in exchange for an honest review.

You can continue to follow the #blogtour via the links below 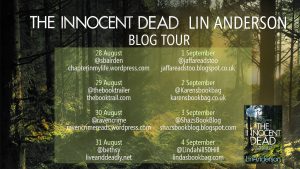 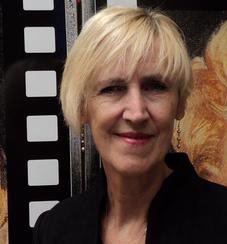 Lin Anderson is the author of over 20 detective novels and the co-founder of Scottish International Crime Festival Bloody Scotland, which is taking place on line this year.

For more about this year’s Bloody Scotland, and its exciting line-up of free events, which take place online between September 18 and 20, visit bloodyscotland.com, follow on Twitter @BloodyScotland and on Facebook @BloodyScotland