The Last Reunion by Kayte Nunn 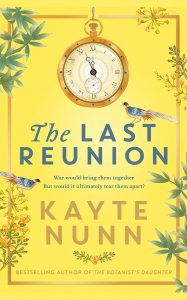 It’s 1944 when, wanting to do their bit for the war effort, Calcutta-based friends Bea, Plum and Bubbles enlist in the Women’s Auxiliary Forces.

As Wasbies, they run mobile canteens for allied soldiers from all nations fighting on the eastern battlefront to end the war against Japan.

As the war takes them ever deeper into the jungles of Burma, they face deprivation, danger and death – but their spirit and determination to survive and boost the troops’ morale, ensures this story is not one of doom and gloom, but excitement and romance, with plenty adventure thrown in.

In a dual timeline narrative, Bea’s story opens in 1999, when art dealer’s assistant Olivia is sent to her ramshackle home to persuade her to sell the fox-girl, a famous Japanese netsuke (or toggle) that surfaced during the war, was stolen while on loan to a private museum in the 70s, and is now, mysteriously, in Bea’s ownership.

To obtain the provenance that will enable them to sell the netsuke on the open market, Bea and Olivia set off to Ireland, for a reunion with the remaining Wasbies.

But friendships will be tested and secrets spilled before the fox-girl can once more see the light of day in all her beauty and mystery.

This was a really gripping story, beautifully plotted and meticulously researched. I learned so much about women’s roles in the Burmese campaign – a truly forgotten war for which veterans had to fight for their rightful recognition in bringing peace to the world.

Descriptions of hot steamy jungles, rivers churning after monsoon rains, and the dangers of battle are lightened accounts of supper dances and tea-parties, where the teacups invariably hold gin!

The Wasbies are a super bunch, each with their own story to tell – from spoilt Plum to heartbroken Joy to the effervescent, tragic Bubbles, they form a tight-knit band whose friendship is often tried but never fails.

In their 70s, just as in their 20s, they are a feisty bunch who spark off each other, and are still prepared to stand-up and fight for what they believe is right.

In some ways, the fox-girl is a metaphor for them. Beautiful, slightly damaged but resilient, lost then found, and a lasting reminder of a war fiercely fought, in which lovers and brothers are killed or taken prisoners, never to return unscathed.

Beautifully romantic, heartbreaking and heartwarming, with characters you’ll soon learn to love, The Last Reunion is a superb read.

The Last Reunion by Kayte Nunn is published by Orion in paperback and ebook.

Kayte Nunn is the author of the best-selling The Botanist’s Daughter and The Silk House. Discover more at kaytenunn.com