03 Feb The Likely Resolutions of Oliver Clock by Jane Riley

Posted at 13:57 in Popular Fiction by Karen Byrom 0 Comments

Thou shalt FACE YOUR FEARS 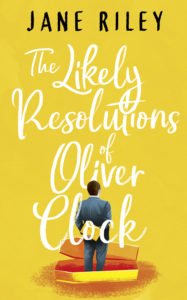 Meet Oliver Clock. Approaching 40, singe, slightly paunchy, caught up in his daily routines that include alphabetizing his kitchen store cupboard, it seems that life is passing him by.

Sometimes he thinks the late departed in the family funeral home that he runs see more action than he does.

He wants things to change. So he makes some resolutions – he will lose weight, relax his routines, and declare his love for florist Maria, whom he’s worshipped from afar for years.

But just when it seems happiness is in his grasp, tragedy strikes and Oliver is left facing life alone once more.

Poor Oliver! But he is not as alone as he thinks. With the help of receptionist Jean, friend Andy and candle-maker Edie, and the occasional hindrance of his mum Doreen, Oliver finally picks up is list of resolutions and begins again …

But will there ever come a point, as he reflects, when he looks as if he has stepped from a Calvin Klein ad? Or is the best he can hope for an affiliation with Old Spice?

This self-deprecation perfectly sums up Oliver’s charm in this witty story of a man who has to face his fears and be true to himself.

Talking to cadavers helps make sense of the thoughts in head but in the end Oliver has to join the world of the living and decide where his future lies.

In its very pathos, the setting of the funeral home provides unexpected humour but like Oliver himself, the narrative is never disrespectful of the dead.

But it’s the living, breathing characters that you’ll take straight to your heart, especially the wonderfully shy, sensitive and ultimately really quite sexy Oliver!

This is Jane Riley’s debut novel, but I suspect and hope we’ll be hearing a lot more from this talented writer.