The Memory Keeper of Kyiv by Erin Litteken

26 May The Memory Keeper of Kyiv by Erin Litteken 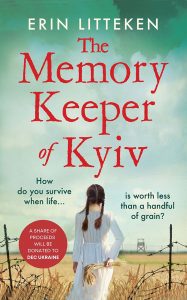 A timely and heartbreaking lesson from history

“The past is done. We must look to the future.” That’s what Cassie’s Ukrainian grandmother Bobby always tell her.

If only we could know that the future would be better.

But the situation in present-day Ukraine is every bit as heartbreaking as it was in 1929, when Stalin’s henchmen rode roughshod through the country, enforcing his collectivisation of farming and industry.

No-one was safe. Labelled Kulaks, or wealthy peasants, farmers lost their land, their livestock and even their lives to their Communist oppressors as they enforced the state takeover of everything a person held dear. People were shot in the street, many were sent to the wastes of Siberia and millions starved to death toiling in the fertile fields to produce food that they were not allowed to eat.

It’s a story every bit as shocking as the Holocaust, in its savagery and inhumanity, but one we know little about as it is not so well documented in fiction.

But author Erin Litteken helps to redresses that balance with The Memory Keeper of Kyiv, balancing tragedy with hope in a story that will touch your heart.

Told in dual timeline that takes us between 2004 and the early 1930s, it introduces us to Cassie, a young widow with a small daughter, both profoundly affected by the tragedy of their husband and father’s death.

Then Cassie’s 92 year old grandmother Bobby’s health fails, and the pair move in to her house to care for her.

Aware of her failing memory, Bobby entrusts Cassie with her journal, and gradually a story unfolds of two beautiful, vibrant Ukrainian sisters, Katya and Alina, in love with two handsome brothers, Pavlo and Kolya.

With hope for the future all but destroyed with the arrival of the Communists, will they find the strength to survive the continuing tragedies of their lives, as family, friends and neighbours disappear, are killed or starve to death?

And if they do, how will they ever survive the trauma and survivor’s guilt of their terrible experiences?

Meanwhile, in 2004, Cassie and her daughter Birdie, must find a way to move on from their own tragedy. Can Cassie allow herself to love again? Will Birdie, mute since the accident that took away her father, find her lost voice?

In a way, the two are metaphors for Katya/Bobby. Like Cassie, she lost everything she loved. Like Birdie, she lost her ability to vocalise the harrowing truths of her earlier life. And with her memory failing, only her journals can reveal the secrets she has kept for so long.

Their stories are beautifully told, the narrative moving along swiftly and surely, unfolding a tale that offers themes of love, loss, danger and romance from the very first page.

Atmospheric writing portrays a picture of Ukraine when it was the “bread basket of Europe”, its people living in peace and plenty, before Stalin destroyed their lives.

And while it doesn’t shirk from the horrors that the Holodomor, or enforced famine, brought, it’s never too hard to read thanks to the strength and courage of its heroes and heroines, who never lose their humanity.

It’s heartbreaking, yes, but Katya’s (and ultimately Cassie’s) is a story of the resilience of the human spirit, and of triumph over tragedy, and gives us hope that tomorrow will be a better day. 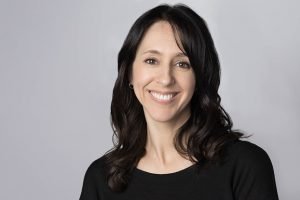 Erin Litteken is a debut novelist with a degree in history and a passion for research. At a young age, she was enthralled by stories of her family’s harrowing experiences in Ukraine before, during and after World War II. She lives in Illinois, USA with her husband and children. 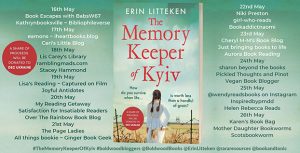