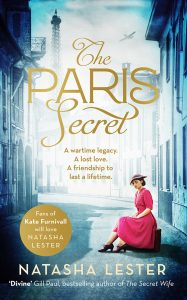 A celebration of heroism, sacrifice and love

This is just the second Natasha Lester book I’ve read, but already I am a huge fan – she just gets the balance of exciting plot, suspenseful drama and deeply satisfying emotion spot on, every time.

The story opens in post-war Paris, at a Christian Dior fashion show as he unveils his new look on a world starved of pretty clothes for so long. His muse and model is Margaux Jourdan, wafer thin and beautiful, but traumatised by her wartime experiences and the loss of so many friends and family.

The narrative then switches back to Cornwall in 1928, where sisters Skye and Liberty Penrose are living an unconventional life with their fortune-telling mother Vanessa, who teaches both Skye and her friend Nicholas Crawford how to fly.

As the years go by the friends are separated – Nicholas returns to his native America while Skye and Liberty are sent to live with their mother’s friend in France. After their mother’s death in a plane crash, Skye returns to England, making her living as an aerial acrobat in flying circuses, until WWII breaks out and she joins the ATA, flying warplanes between the UK’s airbases.

Then she encounters Nicholas again, now part of an air squadron. But he’s engaged, to Margaux, and their previous friendship blows hot and cold.

Liberty, who has been estranged from her sister, now makes a reappearance in her life, too. The scene is set for adventure and bitter-sweet romance.

Meanwhile, in a parallel timeline story set in 2012, fashion conservator Kat has found a collection of beautiful Christian Dior dresses in the wardrobe of an old Cornish cottage belonging to her grandmother, Margaux. She knows Margaux once modelled for Dior – but how on earth did she come by all these dresses?

The mystery around her grandmother’s previous life deepens when Kat is approached by author Elliott Beaufort to ask if her grandmother is the same Margaux Jourdan who played a vital role in the UK’s SOE operations, when young women were sent into France to aid the Resistance movement and act as spies …

There’s so much mystery to be unravelled here, and the story is so beautifully told, that I just couldn’t put this book down.

Though there are so many facets to it – wartime heroism, high fashion, drama and danger –  its central theme is essentially the love story between Skye and Nicholas, and the narrative displays a passion, angst and sensuality that will touch every fibre of your emotions.

The star-crossed lovers path so frequently crosses, but the cruelty of war keeps them far apart.

Even without Nicholas, Skye’s story is fascinating. As a female pilot, she was ahead of her time – despite a desperate need for pilots, the RAF were not keen to admit women into their fold. Skye and her peers had to fight long and hard for acceptance, and her feistiness plays a key part in the dramas that unfold.

It’s not just danger in the skies that’s explored in this story – there’s the dramatic story of espionage, too, which draws us into the danger the brave young women of the SOE faced in France, and the ultimate, harrowing fate of the unfortunate ones who were discovered, captured and sent to Ravensbuck concentration camp. Natasha Lester spares us no details of the horror that awaited them there.

One of the women imprisoned there was Catherine Dior, Christian Dior’s sister, a fact that takes me neatly back to the other theme of the story – Kat’s interest in the Dior collection and her grandmother’s role in the fashion designer’s career. It’s a fascinating thread in the plot, and offers the occasional welcome relief when the main WWII narrative becomes overwhelming.

Overall, this is a beautifully balanced story where all the threads are brought together in a highly satisfying finale that celebrates the life of young women willing to sacrifice their lives and loves for their country. I highly recommend it.

The Paris Secret by Natasha Lester is published by Sphere in paperback RRP £7.99

For more about Natasha’s books, visit her website here