The Quiet People by Paul Cleave

How often have you offered to pack your kid’s bag when they’ve threatened to run away from home? It’s so tempting, isn’t it?

But what if you woke up in the morning and they really were gone?

That’s the nightmare scenario facing Cameron Pittman, one half of a successful crime-writing partnership with his wife Lisa.

Their seven-year-old son Zach has gone missing from their Christchurch home – and he and his wife are the chief suspects.

As DI Rebecca Kent might say to her partner DI Ben Thompson, it’s always the parents …

And when those parents know how to commit the perfect crime – and have boasted in the past about how they would get away with it – well, no wonder the police aren’t actively looking for anyone else.

Especially as the writers’ career is flagging and they desperately need publicity.

It all begins innocuously enough, with a visit to a local funfair. Hyper and difficult as ever, Zach causes mayhem when he disappears for a few minutes. In his ensuing panic, Cameron manages to upset several parents and children, before finally tracking down his son.

Back home, Zach has a meltdown and threatens to run away – and in the morning he is missing.

And so the nightmare for Cameron begins.

Lisa blames him. The police make him their chief suspect. Family and neighbours turn on him – especially when they learn what went on at the funfair.

The missing child enquiry quickly turns into a murder investigation, but Cameron knows in his heart his son is not dead. Somehow, he must find him while at the same time clearing his own name.

Then further tragedy strikes the beleaguered writer, and now he is out, not just for justice, but revenge!

This was a compelling read right from the start. The scenes at the fairground set things up nicely for what was to come – the strength of a father and son relationship, the panic of a missing child, the anger and frustration at people who get in the way of finding said child – all are conveyed in a few short paragraphs that get the tension going.

The fairground incident ends well, but it’s a nice bit of misdirection, setting the reader up for more misdirection to come as the police pick up on clues that may or may not have been planted to divert their attention from what has really happened.

All this lends itself to some really cracking plot twists – just as you think you know what is happening, a change of pace, a shift in atmosphere, a mistrust of the narrative – and sometimes even of the narrator – pulls you up short and leaves you gasping at the turn things are taking.

Cameron is a masterpiece in character description. With his quick temper and volatile reactions, he may not be the hero you expect, but you’ll empathise with his every thought and applaud his motives, if not his actions, as he becomes ever more desperate to make an end to the nightmare scenario that, unlike his own stories, he cannot control.

Author Paul Cleave has a wonderful way with words. All of Cameron’s despair is conveyed in in the phrase “my half empty bottle of whisky, that I knew, if Zach were safe, would be half full”.

Even more poignant is the sentence, “There are some things in your life your mum can’t solve.” With those few words, the reader know Cameron is truly on his own – and that things really might not turn out well for him, for Lisa, or for Zach.

Meanwhile, the mob of one-time friends, fans and neighbours continues to bay for blood in frightening scenes that show how fickle human nature can be.

It’s all part of a multi-layered story that offers up a tense, dramatic and emotional journey through a skilfully-laid plot with a cast of characters who don’t always act in the way we expect, and an outcome that could go in many different ways.

You’ll be hooked from the first page.

The Quiet People by Paul Cleave is published by Orenda is available now as an e-book here,
and in paperback on November 25 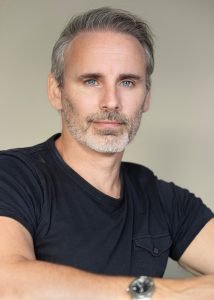 Paul Cleave is an award-winning author who divides his time between his home city of Christchurch, New Zealand, where most of his novels are set, and Europe. He has won the New Zealand Ngaio Marsh Award three times, the Saint-Maur book festival’s crime novel of the year award in France, and has been shortlisted for the Edgar and the Barry in the US and the Ned Kelly in Australia. His books have been translated into over twenty languages. 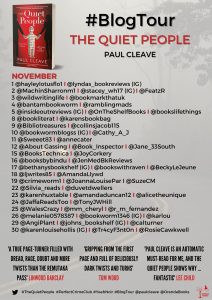