The Retreat by Sarah Pearse

28 Jul The Retreat by Sarah Pearse 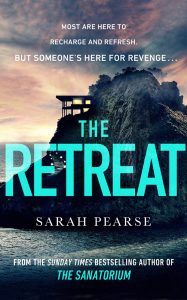 Recent blogtours have taken me to lovely holiday destinations for sun, sea and romance, so I’m ready now for a darker read!

As its title suggests, The Retreat still takes us away from the routine of everyday life, but don’t expect to use your spa towels for anything other than mopping up blood!

When a group of friends visit a luxury retreat on an island of the Devon Coast, they don’t find the peace and tranquillity they expected. Within hours, one of their party is dead, then another…

DS Elin Warner, drafted in from the mainland, suspects there is a serial killer on the loose – but will the island give up its menacing secrets before more bodies are found?

The story opens with sisters Jo and Hana’s arrival on the island, along with Jo’s partner Seth, their cousin Maya, and Caleb, partner of their eldest sister, Bea. Bea herself has cried off the trip, citing work.

There are tensions between Jo and Hana right from the start – Hana, still mourning her late partner Liam who died unexpectedly in a cycling accident, resents Jo’s breezy and careless assumptions that everyone will fall in with her plans. What Jo wants, Jo has always got – but what exactly does she want from Hana  this trip?

Their cousin Maya is the perfect foil to these two, calm and impartial. They all experienced a common tragedy in childhood and it has bound them so closely she is like another sister. But can she mend Jo and Hana’s relationship?

The scene is set for explosive family dynamics, but death comes first, when a woman’s body is found at the bottom of the cliff, and then a young man drowns in the sea.

DS Elin Warner, familiar to readers of The Sanatorium, last year’s runaway best-seller, suspects neither death is an accident. But she must tread lightly with her investigation – after all, her partner Will is one of the architects who designed the retreat, and his sister Farrah is the general manager. She does not want to upset them unnecessarily.

In a further twist, she is also dealing with her own unresolved traumas from her previous case in Switzerland.

She’s vulnerable and afraid, and open to the menacing atmosphere of the island, in the brooding presence of the Reaper, a grim outcrop of rock that seems to warn people away.

But as the body count rises, she’s determined to expose the secrets and lies not only of the people present at the retreat, but of the people who might have been on the island when the murders of several schoolchildren took place a generation ago. Because maybe the police then got the wrong man!

This was a very atmospheric and tense read, right from the beginning, with its menacing hint of the supernatural only adding to its chills.

The tangled and volatile sibling relationships of sisters Jo and Hana set the pace for a multi-layered, entangled plot where their past secrets and lies echo the past secrets of the island itself.

With short chapters, various viewpoints and physical and emotional mayhem on every page, this is a book you won’t put down until the end.

The Retreat by Sarah Pearse, published by Bantam Press is available in hardback and ebook 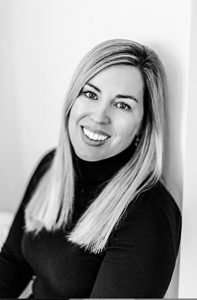 Sarah Pearse lives by the sea in South Devon with her family. Her experiences living in the Swiss Alps in her early twenties inspired her acclaimed debut novel The Sanatorium. 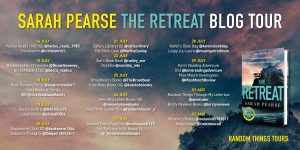 Thanks to Anne Cater of Random Things Tours for inviting me on this blogtour and to Penguin  for the advance copy of the book.