The School For Good Mothers by Jessamine Chan

15 Mar The School For Good Mothers by Jessamine Chan

Posted at 10:18 in Dystopian Fiction by Karen Byrom 0 Comments 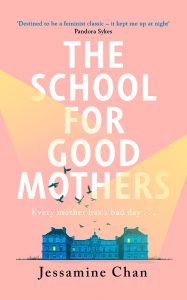 At the end of her tether, single mother of a demanding toddler Frida Liu makes a terrible mistake leaving her alone at home for a few hours. She loses custody of Harriet to her ex-husband and her only chance to win her daughter back is to attend the school for good mothers, a prison-like, state-run institution where she’ll be challenged every minute of every day to prove she can be a good mother to her child.

Put in charge of a life-like robotic toddler, she endures humilation, petty bureaocracy and downright cruelty in her endeavours to prove her fitness, along with the other mothers, whose infringements range from beating their child to allowing them to walk home alone from school!

This story works on so many levels. Themes of poverty, loneliness, racism and imposter syndrome are all explored with sensitive understatement; it has a great main character in Frida, who is empathetic, open and honest from beginning to end; and a gripping plot that has us questioning what it means to be a good mother.

Because while there is no doubt Frida’s action was wrong, she loves her child heart and soul.

It’s also a disturbing dystopian tale that shows how insiduously the state can take control of our lives – and how society always veers to the misogynistic. Because it’s almost always the mother’s fault!

In some ways this story reminded me of Margaret Atwood’s The Handmaid’s Tale in its portrayal of sadism against women, not just by men but other judgmental women.

A definite five-star read that will have the reader examining their own views on motherhood, and questioning whether or not they themselves might sometimes be a bit too quick to judge.

The School For Good Mothers, published by Penguin, is available in hardback and ebook

Jessamine Chan lives in Chicago. The School For Good Mothers is her debut novel.