22 Apr The Scoop by Cat Walker

Posted at 09:20 in Popular Fiction, Romance by Karen Byrom 0 Comments 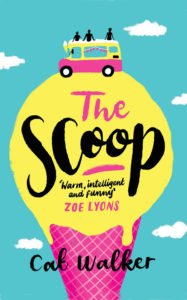 Fed up of lockdown? Take a virtual roadtrip across Europe with Casey in an ice-cream van called Alice!

Casey is having an early mid-life crisis – her job bores her, her girlfriend’s left her and her parents just don’t understand her gayness.

In a moment of recklessness she invites old friend Dan to escape with her on a campervan tour of Europe.

What she doesn’t factor in is Dan’s sulky son Ari – Dan’s looking after him while his mum Niobe receives treatment for breast cancer.

Nor does Casey expect Dan to spend her hard-saved money on a converted ice-cream van. Alice is not the RV of her dreams – a horn that plays Greensleeves is unlikely to persuade other traffic to get out of the way – but it’s all part of the adventure.

But as the three travel through Belgium, the Netherlands, down into Germany, through the Czech Republic and the Balkans, crossing Istanbul and down through Turkey and on to China, their ultimate destination, will Casey find the answers she’s searching for about life, the universe and everything?

I have to say this story is not the fictional travelogue romance I was expecting! Yes, there are atmospheric descriptions of foreign countries and their people, but the background narrative is more a potted political history of the countries Casey, Dan and Ari pass through. And given the countries they’re visiting, Casey’s journey becomes more of a road trip through atrocities as she reflects on the impact of such cataclysmic events as WWII, the Balkans wars, Ottoman invasions and China’s cultural revolution.

This doesn’t always make for easy reading, but fortunately the narrative is relieved by Casey’s droll, self-effacing humour on her “Zombie apocalypse survival trip”, the introduction of eccentric characters the adventurers befriend along the way, and the emotional pull of Casey’s burgeoning relationship with Ari. Maybe she does “have the gene to cope with children” after all.

But will she ever find the inner contentment she is looking for? And is there anyone out there for her to love?

Romance and comedy are an integral part of The Scoop’s narrative, though this isn’t the romantic comedy I was expecting when I picked it up.

But it’s an entertaining lesson in recent political history, offering insight into the factors that influenced and shaped our international neighbourhood, and there is one thing for sure – reading it makes you realise that if humanity can survive man’s inhumanity to man, we can survive a pesky thing like Corona virus!