26 Oct The Searcher by Tana French 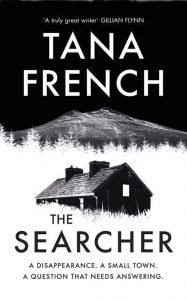 Retired Chicago cop Cal Hooper is hoping to escape it all in Ardnakelty village where he has bought a derelict cottage to do up. But almost from the start he feels he is being watched – and is proved right when a young under-privileged kid, Trey, appears. Trey wants Cal’s help in finding older brother Brendan, who disappeared months ago.

Unwillingly, Cal is drawn in – but he needs all his skills as an investigator to break through the barriers of silence built up by the whole community. So far, his neighbours have welcomed Cal into their fold – but what will happen when he starts asking questions?

This was a really absorbing read, not just for the mystery waiting to be solved, but for the sheer beauty of the prose. Author Tana French uses nature to create an air of menace – the story opens with Cal looking out at a clamour of rooks devouring a young rabbit – an allegory of what is to come when young Trey falls foul of the folk whom Brendan courted.

Characters form before your eyes in  just a sentence or two – shopkeeper Noreen “favours tops with explosive flowers and has short brown hair set in such tight curls that it looks like a helmet”. Immediately you just know she’s nosy and interfering! In a similar way, we get to know Noreen’s sister Lena; Mart, a neighbouring farmer; Sheila, Trey’s mum – together they are part of a community that is on the surface the kind of familiar small town that could be found anywhere in the world. Yet scratch the surface, and it becomes alien and somewhat menacing when it perceives itself under threat.

Cal’s relationships are integral to the story – his brittle communications with his ex-wife and daughter back home, his friendship with sardonic Mart, his growing bond to Lena (just about the only person in Ardnakelty he truly trusts) are all explored with sensitivity.

But it’s his relationship with Trey that matters most. Through their bond, the narrative explores themes of trust and friendship, and also redemption as Cal looks back to a former life when he let down the person he loves most in the world. Conflicted by the situation he now finds himself in, will  he allow history repeat itself? And what will happen to Trey if Cal turns his back?

The Searcher by Tana French is published by Penguin on November 5 in hardback, RRP £14.99