Posted at 13:49 in Best-selling Author, Historical by Karen Byrom 0 Comments 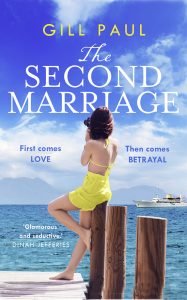 A love triangle like no other – the fascinating story of Jackie Kennedy, Maria Callas and Aristotle Onassis

We all know the story of Jackie Kennedy – how she met and married Jack Kennedy, was widowed in tragic circumstances and went on to marry Aristotle Onassis, the Greek shipping magnate. Or maybe we just think we do …

Until I picked up Gill Paul’s fascinating fictionalisation of her life, I did not realise that Jacqueline was an intellectual, a photographic journalist before her marriage and a book editor after she was widowed a second time.

Nor did I realise that Jackie, having put up with Jack’s infidelities in her first marriage, had to face the same challenges in her second.

For this book also tells the story of Maria Callas, the opera singer, whose relationship with Onassis over seventeen years – including his time married to Jackie – was a marriage in all but name.

The two women were so different, yet in some ways so similar. Jackie enjoyed wealth and privilege from childhood, while Maria was born into a poor family, and pimped out to German soldiers by her cold, uncaring mother. She had to work so hard to overcome her beginnings and carve out a successful career for herself.

But their lives also have eerie parallels. Both had unhappy childhoods. Both fell in love with unfaithful men. Both suffered the pain of miscarriage and stillbirth – in Jackie’s case, three times. Both were fiercely loyal to the loves of their lives.

They became famous, rich and feted wherever they went, yet they were more than mere celebrities. Gill Paul captures brilliantly the essence of both Jackie and Maria as women first, celebrities second. Despite the trappings of luxury that surrounds them – yachts and diamonds, fur coats and champagne lifestyle – they are both women we can all identify with. Fragile, yet strong, each copes in her own way with the challenges and tragedies that life throws at them.

The Second Marriage is a refreshing insight into the lives of its three main characters. Onassis – a famous collector of celebrity “scalps” who would nowadays be rightly demonised by the #metoo generation –  is humanised by his love for Maria and his children, and his grief over his lost son. Jackie becomes more than America’s saintly widow as she navigates the difficulties of life in the public eye.

But it’s Maria who captured my imagination most. I knew nothing at all about her other than that she was a famous opera singer, and it was fascinating to get the glimpse into her life.

Gill Paul takes a sympathetic approach to all three characters, helping to humanise them in the midst of the somewhat incestuous celebrity pool in which they live their lives.

If I have one criticism of the story, it is that a little mystery – Gill Paul’s usual trademark in her historical novels – would have added some suspense to a story in which we already know the final outcome. But that’s not to take away from her warm, sympathetic telling of this tangled love triangle.

Just a wee thought to end with. Is Jacqueline the second wife of the title? Or is she Maria, Onassis’s spouse in all but name? Who deserves the title more? Over to you …

The Second Marriage by Gill Paul is published by Avon, RRP £8.99

Gill Paul writes historical fiction about real people, often adding a twist that lends an extra layer of mystery and suspense to their already fascinating lives. From the tragic Romanov princesses to Wallis Simpson to Diana, Princess of Wales, she brings a freshness to her retelling of their stories.