11 May The Secrets of Sunshine by Phaedra Patrick

Posted at 10:09 in Popular Fiction, Romance by Karen Byrom 0 Comments 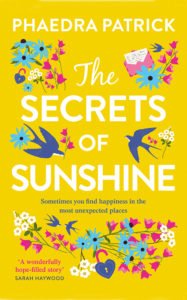 If you save a life are you responsible for it?

Since the tragic death of his soulmate, single father Mitchell Fisher has sworn off love – to the extent that he revels in his job of removing the padlocks that are weighing down the town’s “love” bridge. Every padlock tells a story – and each is an arrow in his own grieving heart.

Then one day, a young woman stretching to attach a padlock falls into the swirling water below. Mitchell doesn’t hesitate to dive in to save her, but in the ensuing confusion she disappears.

Intrigued, Mitchell sets out to discover who she is. Serendipitously, his eight-year-old daughter Poppy’s music teacher, Liza, turns out to be the woman’s sister – she too is desperate to know the mystery behind her sister’s disappearance and so she and Mitchell join forces to track her down.

Meanwhile, letters from people who once fastened padlocks to the bridges begin to arrive for Mitchell, the “hero of the bridge” – each telling its own heart-warming story

And finally, a key begins to turn in Mitchell’s own locked-down heart as he faces his own loss and begins to look to the future once more.

This is a really enjoyable read on all levels. The mystery of the missing woman is intriguing in itself, but it’s Mitchell’s journey of self-discovery that really holds the reader’s attention. He’s not the only attractive character in the book – zany Liza is a woman you’ll instantly warm to.  Poppy is a delight. Funny, smart and protective of her father, she’s as integral to the story as the adults.

And then there are the letters – as the thoughts, ideas and secrets of stranger unfolded on the pages, I wished there had been more of them.

A charming story of love and longing, grief and consolation, and ultimately hope and happiness.