The Smallest Man by Frances Quinn

Posted at 13:48 in Debut, Historical by Karen Byrom 0 Comments 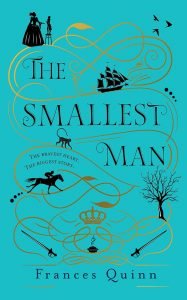 Meet a little man with a big heart

The year is 1625 and in a village north of London, 10-year-old butcher’s son Nat Davy is about to set out on life’s next big adventure.

A dwarf, he’s tried everything from pleading with the faeries to enlisting his brother Sam’s help to stretch him from a tree in order to grow.

His father’s about to sell him to a freak show when he comes to the attention of the Duke of Buckingham who buys him as a gift for King Charles wife, Henrietta Maria.

Poor Nat is popped in a pie to emerge to a life in court where he soon becomes the queen’s confidant and finds a life-long friend in Jeremiah, a gangly giant who teaches him to ride.

Though Nat faces many challenges, he tries to remember his mother’s advice that he may be “small on the outside, but inside he’s as big as everyone else”.

There’s certainly nothing little about his loyalty to his masters – Nat sticks with the queen through thick and thin as Charles leads his country into a bloody civil war. As his adventures take him around England and across Europe, Nat grows in wisdom, courage and strength, proving himself a true hero more than once.

But still he longs to be like other men, to be accepted as an equal by his peers and settle down with his one true love.

Has our small hero set his ambitions too high or will he find happiness in the end?

What a joy of a read! Descriptive prose immerses you in seventeenth century England, where the sights, sounds and smells of the times – be it at a country fair or royal palace – immediately evoke a sense of time and place. There’s adventure on every page as Nat navigates his way through turbulent times, but most interesting of all is his journey to maturity as he finally accepts himself for who he is, puts his experience to use to help others and finds the courage to finally live the life he wants to live.

The Smallest Man by Frances Quinn is published by Simon & Schuster in paperback,  RRP £8.99