02 Jun The Split by Sharon Bolton 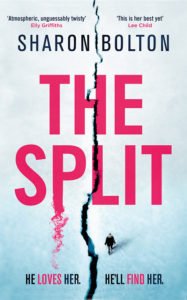 Chills and thrills in the frozen south!

Ever since I read The Craftsman, I’ve been a huge fan of Sharon Bolton. She is a master of darkness, intrigue and cunning and The Split more than lives up to the promise of her earlier books.

The story opens with Felicity Lloyd, a research scientist based in South Georgia, anxiously scanning the horizon for signs of a ship. She knows it will bring danger – for on board is her stalker, a man who has been promising to track her down.

Is there no escape, even in the icy wastes of Antarctica?

What’s caused Felicity to bolt? The story goes back to the previous summer in Cambridge where Felicity, suffering fugue states, has consulted psychiatrist Joe. He’s almost as troubled as she is – just back from work after a traumatic incident with one of his homeless clients, he is now seeing other homeless people turning up dead or murdered. A shadowy night-time figure named Sean is eluding all attempts to catch him – despite the fact that he has visited both Felicity and Joe at least once in the dead of the night!

As the danger escalates, Felicity flees to South Georgia – and so the reader is returned there, too, for a game of cat and mouse as Felicity tries to elude the man who threatens her very existence.

The twists and turns in this devastatingly clever story will satisfy the most ardent of crime-thriller fans! There’s no second guessing what it going on – Sharon Bolton keeps the suspense and the tension racked high right up until the story’s audacious denouement!

Great characters, the atmospheric contrasting backgrounds of South Georgia and Cambridge, and a highly-original plot make this book a winner!

Sharon Bolton is winner of the Crime Writers’ Association “Dagger In The Library” Award for her thrilling, page-turning books! Find her online at SharonBolton.com, on Facebook  on Instagram and on Twitter.