15 Apr The Therapist by BA Paris

A thriller with killer twists 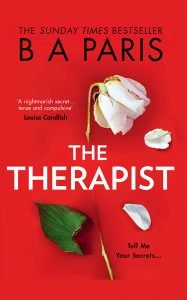 BA Paris’s latest novel takes us into The Circle, a gated community of 12 houses where Alice hopes she’ll be happy with new partner Leo. But then she learns that the previous owner of her house, Nina, a therapist, was murdered by her husband in the bedroom that Alice now sleeps in!

Everyone accepts that Nina’s husband Oliver killed Nina before killing himself, but Alice has strong doubts. Will she get to the truth before the killer gets to her?

This is a well-plotted and well-paced story with really strong characters. Told almost exclusively from Alice’s point of view, we share her hopes, dreams, fears and anguish as she uncovers secrets and lies, not just about her new neighbours, but about Leo.

Because it soon becomes apparent that he has lied to her. Not only did he know that a murder had been committed in their new house, he is hiding something else about his past.

Blessed with an active imagination, Alice even begins to wonder if he might have known Nina. Could Leo be the killer? Or could it be one of their new neighbours? Will, Geoff, Tim? What are all their wives and partners hiding from Alice behind their superficial friendship?

The only person Alice feels she can really trust is Tom, the private investigator working for Oliver’s sister to clear her brother’s name.

I felt the substory of Alice’s tragic past – she lost her parents and sister in a car crash – could have been explored a bit more. As well as grief, she suffers survivors’ guilt, and I would have liked to have seen that properly resolved. After all, her grief for her sister, also called Nina, is her avowed driving motivator for achieving justice for the Nina she has never met.

But that is a minor quibble in what I otherwise an excellent story. Along with the suspense, there’s a good element of creepiness to this tale and, even knowing the author’s fondness for twists, and so looking out for them, I wasn’t able to guess the outcome at all.

But all in all, this was a satisfying suspenseful read I would recommend to lovers of thriller domestic noir.