11 Jul Under A Wartime Sky by Liz Trenow

Posted at 08:28 in Romance, Wartime by Karen Byrom 0 Comments 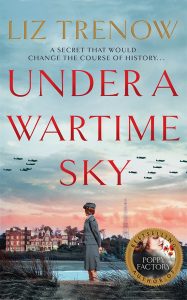 It’s 1936 and the dark clouds of war are gathering, but all Kath Motts can think about is her 16th birthday, the freedom of leaving school and the excitement of stolen kisses with the handsome young men who are her brother Mark’s mates at the flying station down on the shores of Felixstowe.

But just along the seafront at Bawdsey Manor, accessible only by ferry, more young men are gathering as the brilliant minds of Britain’s top physicists come together under the auspices of Robert Watson-Watts and Dr Albert “Jimmy” Rowe to develop a radio system of detecting enemy planes in the sky.

Among them is Vikram Mackensie, son of a Scottish teaplanter and Indian mother, a brilliant Cambridge graduate. Affable and polite, he nevertheless always feels something on an outsider among his peers – aware of the inbred prejudice many hold because of his skin colour, but determined to do his bit for the country he has lived in since he was just 10 years old.

As Kath and Vic’s stories develop in tandem, we are drawn into two different but compelling worlds – sharing the fun and frustration of Kath’s life as she makes the transition from girl to woman, thrilling to the determination of Vic and his colleagues as they throw themselves into their vital defence work.

Their paths cross fleetingly, but it is not until Kath goes to work at the manor that their acquaintance develops into friendship.

But then war breaks out, and both Kath and Vic’s lives change once more as his quest to develop the perfect radar system becomes ever more urgent and she chooses a wartime role that, though it mirrors his, will take them down different paths and separate them, perhaps for ever …

With a delicious sense of suspense right from the first, Under A Wartime Sky is a truly thrilling story. Aside from the romantic theme, which is compelling in itself when you have two such lovely characters as Kath and Vic, the story of the development of an infallible radar system for detecting enemy planes was more interesting than I could ever have imagined.

Liz Trenow breathes real life into real-life heroes Watson-Watts and Rowe, capturing the angst, danger and suspense of their sometimes seemingly-impossible mission in a swift-paced narrative that is meticulously researched, but never dry. With characters like Vic, his friend Johnnie and their sometimes dislikeable colleague Frank, the atmosphere crackles like the radio waves the men are racing to develop.

Vic’s a wonderful hero – so self-effacing in some ways, so confident in others. He faces up to prejudice, loss and loneliness with courage and determination, never feeling sorry for himself nor inviting others to pity him.

And Kath is a delight. I warmed to her instantly. She’s a straightforward likeable girl, bright and pretty, warm and loving to family and friends, curious and interested in the world around her, and intensely loyal to those she cares for. She’s no saint – like every other girl, she wants a little fun –  which just makes her all the more loveable.

This was a period of wartime history I knew nothing about, but I thrilled to the tension and danger as Vic and Kath played their parts with courage and strength, acutely aware that “the lives of thousands and the future freedom of our country depend on you”.

No matter how many wartime stories you’ve read, Under a Wartime Sky will add to your understanding of the difficult times our grandparents and great-grandparents went through to keep us future generations safe, while satisfying your soul’s long for romance.

Thanks to Ellis Keene  of Pan for inviting me on to this #blogtour, and for the advance copy of Under A Wartime Sky in exchange for an honest review. 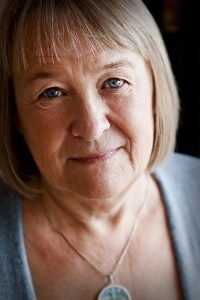 Liz Trenow has written several historical novels, including The Last Telegram, The Forgotten Seamstress, The Poppy Factory and The Silk Weaver. Her inspiration for Under A Wartime Sky came from remembered childhood glimpses of the fairy-tale towers of Bawdsey Manor, which remained out of bounds to Felixstowe visitors until long after the war. Liz’s interest in its history and the vital war work which went on there sparked Vic and Kath’s fictional story.

For more about Under A Wartime Sky and Liz Trenow, join the full #blogtour by following the links below 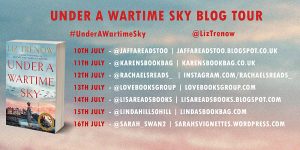