When I Was 10 by Fiona Cummins

Posted at 11:12 in Crime, Thriller, Uncategorized by Karen Byrom 0 Comments 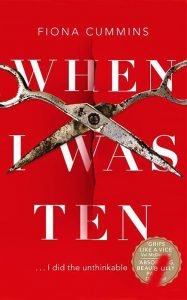 I first reviewed this for NFOP magazine last year, but it’s a story that has stayed with me, and now that it’s out in paperback, I want to share it with the rest of you! Stories of children who kill always hold a dark fascination, and this one is superbly crafted, with some dark twists and turns that I certainly didn’t see coming.

Her husband Edward and 12-year-old daughter Honor have always know that Catherine Allen was the survivor of a family tragedy. But it’s not true that her parents and sisters died in a house fire, as she claims. In fact, Dr and Mrs Carter were killed as they slept, stabbed multiple times with kitchen scissors by their pre-teen daughter. She was arrested, charged and locked up; her sister went into foster care.

Now, 21 years later, the case has reared its ugly head again as one Carter sister goes public to try to track down the other, and suddenly Catherine’s carefully curated happy family life is threatened by the truth of her past.

But what is that truth? Only three people alive know for sure – Shannon and Sarah Carter and their childhood friend, Brinley, now a reporter with a national newspaper. Will her involvement in the sensational news stories that are circulating help or hinder Catherine as she once again faces building a new life from scratch.

As the narrative progresses, a harrowing story emerges of two little girls despised and abused by their outwardly respectable parents.  The descriptions of how they are treated are so upsetting that you can only feel sympathy for the sister who cracked.

This story is tense and dramatic from its very beginning, when we meet 12-year-old Brinley alone in a lightning storm, traumatised enough by the death of her own mother without the added burden of her friends’ tragedy. As a thrilling domestic noir, the plot supports itself with the drama and danger of the past seeping into the present in a tense and thrilling climax.

But author Fiona Cummins goes one step further and forces us to examine our attitudes to children to kill. Do we believe that they can be rehabilitated? Or, like Geoffrey Heathcote, the deeply unpleasant Secretary of State for Justice in this sorry tale, do we secretly think they should be punished for life?

Maybe the burden of guilt, of lies and unhappiness ensures that they punish themselves.

When I Was 10 by Fiona Cummins is published by Macmillan in paperback, RRP £8.99

Fiona Cummins is the best-selling author of Rattle and The Collector, two serial killers tales that kept me up all night with their dark and gripping plots! Follow her on Twitter @FionaAnnCummins and on Instagram @fionacumminsauthor