15 Mar You Let Me In by Camilla Bruce 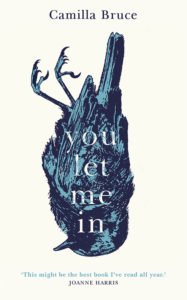 Away with the faeries …? A dark, fanciful fairy story or something more disturbing?

Everyone knew best-selling author Cassandra Tripp had twice got away with murder. After a sensational trial she was acquitted of the murder of her husband Tommy, whose dismembered body parts were found scattered in the woodlands surrounding her home. Years later, her father and brother’s horrific deaths were put down to murder/suicide – but everyone who knew Cassandra was convinced that she was to blame …

Now Cassandra herself is missing, presumed dead, leaving behind only a letter to her niece and nephew that reveals a disturbing two-fold story.

Cassandra tells what she perceives is her truth. How, from a young age, she was targeted by a fairy she calls The Pepper Man, a sinister figure who is by turn malevolent and benevolent, feasting on her blood, yet bringing her woodland presents and creating a shield that protects her from her mother’s wicked tongue, her brother’s fearful indifference, her sister’s careless jealousy. Her retreat from the world is the fairy mound she has stumbled on in the wood.

Peopled with faeries who once lived as humans but now depend on the blood of living creatures to survive, it’s a place of danger, yet safety, too. Here you’ll meet Pepper-Man and Mara; Harriet and Gwen, all not quite alive yet living in the fairy mound, all ready and sometimes too willing to help Cassie in whatever predicaments she finds herself in.

According to Cassie’s account, the fairy mound is a place of magic and mystery, where unborn children can be raised, dead men resurrected and mind-altering potions dispensed.

But of course, the world believes she is mad – even her psychiatrist dismisses her version of events with the title of his book: Away With The Faeries, insisting instead that Cassandra has created a fantasy world to escape from the brutal reality of childhood abuse.

Will you believe him, or will you believe Cassie? This dark yet enthralling tale, which follows Cassandra from childhood to her disappearance as an old lady, challenges the reader to question their own perceptions of reality.

Cassie’s account is utterly convincing and brutally honest – but whether she is disturbed or telling the truth, you’ll weep for a little girl lost to the cruelty of whichever of her worlds you choose to believe in.

The enduring message I took from this book is that everyone needs love – how sad it is that circumstances force a little girl to look for that love in the unlikeliest of places.

Camilla Bruce is a Norwegian writer who grew up in an old forest, next to an Iron Age burial mound! Website: www.camillabruce.com
Instagram: @camillabruce_writing
Twitter: @millacream