17 May Listening Still by Anne Griffin 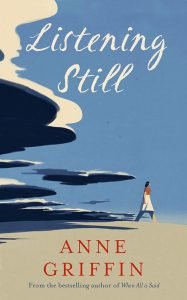 When the dead speak, Jeanie listens …

I wondered if any follow-up could possibly be as good as When All Is Said, Anne Griffins’ debut novel, but this brilliant author has done it again with the story of Jeanie, a 32-year-old woman living in a small Irish town where she works at the family funeral parlour. When her parents announce they are retiring, leaving Jeanie and her husband, Niall, in charge, Jeanie feels conflicted, remembering how once she longed to spread her wings.

But she’s trapped in Ireland, by the living and the dead – the latter, it transpires, need her as much as her family, For, like her father, she can hear their final thoughts and relay their messages to their surviving loved ones. Messages as banal as where they can find the will, to as shattering as revealing their parentage isn’t what they thought!

Against the backdrop of conversations with the the dead, Jeanie’s own story emerges, of schoolday friendship with Peanut, Ruth and Niall, of taking up her post at the funeral parlour, of meeting the love of her life, Fionn, who wanted her to move to London. But she could not abandon her responsibilty to the dead – a decision that may come back to haunt her.

Bent under the weight of her responsibilities as a listener to the late departed, facing trouble in her marriage and touched by personal tragedy, Jeanie must finally decide where her future lies. Can she continue to bear the needs of her clients – or is it time to turn her back on the dead?

What a joy of a read! Funny and emotional, the story draws you in straightaway with its matter-of-fact acceptance of the living and the dead conversing “as naturally as woodpigeons.” It’s peopled with wonderful characters, from Arthur the Twix-addicted postman to Jeanie’s autistic brother, Mikey, her embalmer aunt Harry, and her friends Peanut and Ruth.

The author’s prose is superb – descriptions of people, places and events spring naturally from the pages, and she makes great use of similes and metaphors to capture exactly the emotions she want us to share – like Jeanie feeling as if “I’d jumped into Lough Sear on the coldest day in winter” to describe her reaction to Fionn.

None but a born storyteller could tell us Jeanie’s “Irish freckles cover every surface like daffodils in March”, and that’s what Anne Griffin is – a born storyteller who has given us another great story of human relationships between family, friends and lovers, introduced a quirky twist with the voices of the dead, and encouraged us to think about the importance of being true to ourselves in this life, and maybe even the next.

Listening Still is published by Sceptre in hardback, RRP £14.99

Listening Still is Anne Griffin’s second novel, following When All Is Said – an equally powerful, evocative read exploring one old man’s life of love and regret as he faces the final curtain.