The Maid by Nita Prose

01 Feb The Maid by Nita Prose

Posted at 09:27 in blogtour, Debut by Karen Byrom 2 Comments 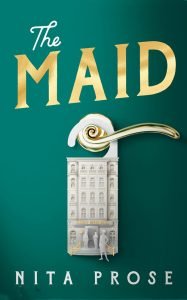 Will chambermaid Molly uncover the dirt in this fabulously quirky whodunit?

Meet Molly Gray, the hotel chambermaid who sees everything in black and white! She may be my new favourite quirky character, coming as she does from the same place as Eleanor Oliphant, Veronica McReedy (octogenarian heroine of Call of the Penguins) and Hope Nicely, whose Lessons in Life taught us all a thing or two about the importance of celebrating neurodiversity.

Brought up by her late grandmother, who taught her manners, morals and the importance of cleanliness, Molly loves her job as a maid at the Regency Grand Hotel. She enjoys delivering guests’ rooms back to a state of perfection, asking no questions and expecting no more than the thanks that is due.

Little kindnesses from hotel customers like Giselle Black, and forlorn dreams of a romance with charming bartender Rodney, offer her some hope for a brighter future, but on the whole, her rather lonely life is one of routine – until the day  Giselle’s husband, wealthy regular hotel client and unpleasant businessman Charles Black, is found dead in his hotel bed!

Foul play is suspected and the police become involved. Before long, poor Molly finds herself a suspect, and finally begins to realise that she has been played by the people she thought were her friends.

Will she take the fall for the dirt that is about to exposed? For despite Molly’s best efforts, not everything about the Regency Grand Hotel is squeaky clean. Molly’s about to discover some messes can’t be cleared up with a dustpan and brush. She’ll need all her wits to see her through this one.

Fortunately, Molly has some real allies – kitchen worker Juan Manuel, doorman Mr Preston and his lawyer daughter Charlotte, all come to Molly’s aid. But can she clear her name and deliver the truth about what has really been going on at the Regency Grand Hotel?

This charming novel may have a murder-mystery plot driving the narrative, but the real story is Molly’s journey through the predicament she has found herself in.

She’s a super character who will make you laugh and cry in turn with her precise manner of speaking, her habit of taking everything literally and her conviction that cleanliness can solve life’s problems.

She’s honest with herself, and with the reader –  she may not always deliver the whole truth, but she is unable to conceal when she is hiding something, giving us tantalising clues that awaken the detective in all of us.

It’s entertaining, too, to see the other characters through her eyes. Her dearly missed gran, her ex-boyfriend “bad egg” Wilbur, her avaricious landlord Mr Rosso, her snotty supervisor “Chernobyl” Cheryl, her boss Mr Snow – all spring to life from the pages as they exert their influence for good or for bad on honest, trusting Molly.

You might expect Molly’s journey from invisible maid to murder suspect, to super sleuth, to change her, and certainly her character grows and develops throughout the story. But thankfully she retains all the charm and empathy that is apparent in her from the very first page to the last.

As a character-led murder-mystery story – with obligatory and breath-taking twists – written with humour, warmth and perceptiveness, I thought The Maid was a brilliant story on every level.

So good is the story, The Maid is currently being made into a movie starring Florence Pugh – but don’t wait for its release to get acquainted with Molly.

She’s far too good a character to put off meeting! 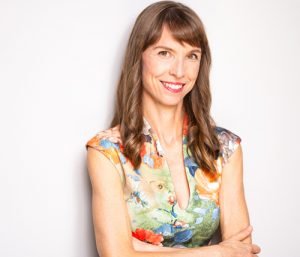 Nita Prose is a longtime editor, serving many bestselling authors and their books. She lives in Toronto, Canada, in a house that is only moderately clean. The Maid is her debut novel. 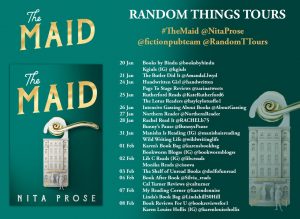 Thanks to Anne Cater of Random Things Tours for inviting me on this blogtour and to HarperCollins for a copy of the book in exchange for an honest review.